Yen Audio, Yen Press‘ new imprint for audiobooks, announced the voice artists who are narrating its audiobook adaptations for the following light novels on Friday:

Yen Audio announced the audiobooks of the light novels during its panel at the Anime NYC event on November 21.

Yen Press will release the first volume of Isuna Hasekura‘s Spice and Wolf light novels as an audiobook on March 15.

The life of a traveling merchant is a lonely one, a fact with which Kraft Lawrence is well acquainted. Wandering from town to town with just his horse, cart, and whatever wares have come his way, the peddler has pretty well settled into his routine—that is, until the night Lawrence finds a wolf goddess asleep in his cart. Taking the form of a fetching girl with wolf ears and a tail, Holo has wearied of tending to harvests in the countryside and strikes up a bargain with the merchant to lend him the cunning of “Holo the Wisewolf” to increase his profits in exchange for taking her along on his travels. What kind of businessman could turn down such an offer? Lawrence soon learns, though, that having an ancient goddess as a traveling companion can be a bit of a mixed blessing. Will this wolf girl turn out to be too wild to tame?

Hasekura launched the Spice and Wolf novel series with illustrations by Jū Ayakura in 2006. The novels took a break after the 17th volume in 2011, and returned with the 18th volume in 2016. The 23rd and latest volume shipped on September 10. Yen Press published the 22nd novel in North America on November 2, and is also publishing the manga adaptation. Hasekura began a spinoff series, Wolf & Parchment: New Theory Spice & Wolfin April 2016. Yen Press is also releasing the spinoff series in English, as well as its manga adaptation.

The novels also inspired two TV anime seasons from director Takeo Takahashi and scriptwriter Naruhisa Arakawa. The first season aired in Japan from January to March 2008, and the second season (Spice and Wolf II) from July to September 2009. Funimation released both seasons on home video.

The series is inspiring a new anime.

A virtual reality anime followed the television anime and debuted in June 2019 for Oculus Rift, HTC VIVE, and Oculus Go Edition. A sequel debuted in December 2020. 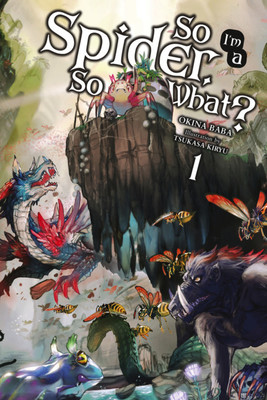 Yen Press will release the first volume of the So I’m a Spider, So What? light novels as an audiobook on April 12.

I used to be a normal high school girl but in the blink of an eye, I woke up in a place I’ve never seen before and—and I was reborn as a spider?! How could something that’s nothing more than a tiny spider (that’s me) possibly survive in literally the worst dungeon ever? Are there no rules? There should be some rules! Who the hell is responsible for this? SHOW YOUR FACE!

The novels inspired a television anime starring Aoi Yuki that premiered in January 2021 and aired for 24 episodes.

Baba launched the novel series on the “Shōsetsuka ni Narō” website in May 2015. The series ranked #2 on the list of best novels in the 2018 edition of Takarajimasha‘s Kono Light Novel ga Sugoi! (This Light Novel Is Amazing!) guidebook, and ranked #3 on the 2017 list.

Yen Press is also publishing Asahiro Kakashi‘s main manga adaptation and Gratinbird‘s spinoff manga So I’m a Spider, So What? The Daily Lives of the Kumoko Sisters in English. 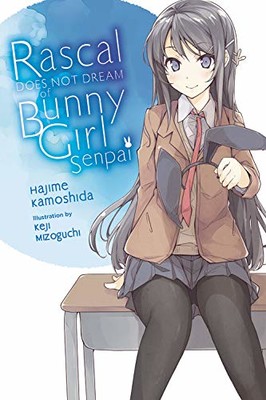 Yen Press will release the first volume of the Rascal Does Not Dream of Bunny Girl Senpai light novel series as an audiobook on June 14.

Bunny girls do not live in libraries. This is simply common sense. And yet, that’s exactly where Sakuta finds one in the wild. More bewildering is who the bunny girl is: Mai Sakurajima, a girl one year older than Sakuta, famous at their school for her acting career even though she’s currently on break. To top it all off, it seems like no one else in the library can see Mai at all, no matter what she does or…wears. Wanting to find out more about this mystery and maybe get a little closer to this beautiful upperclassman in the process, Sakuta launches an investigation to discover why an unforgettable bunny girl keeps becoming totally invisible.

The novels inspired a television anime series in October 2018 and the sequel film Rascal Does Not Dream of a Dreaming Girl in June 2019.