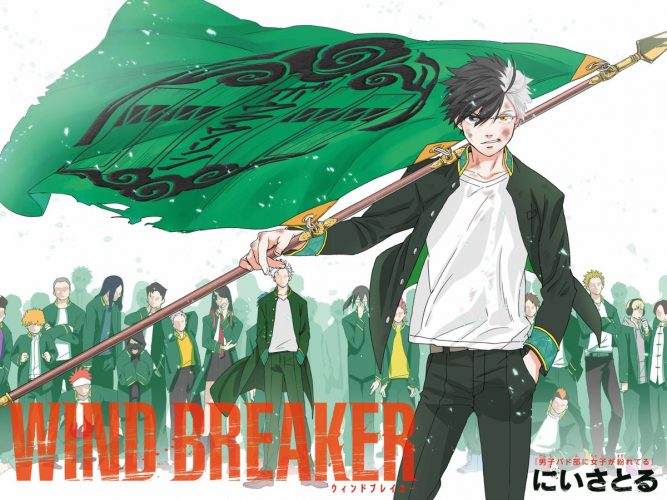 It’s a surreal experience to read and review a manga, turning each page, knowing that you’re witnessing the birth of something fantastic. Knowing that each gorgeously illustrated panel will most likely be adapted to the screen one day soon — and mark our words, WIND BREAKER by Nii Satoru definitely has the makings of the next big shounen anime. New series can be hit-and-miss sometimes, but WIND BREAKER literally comes in swinging, with a story about fighting, belonging, and what it truly means to be a hero. With a punk main character, a colorful cast of high schoolers, and excellently kinetic battles, we’re truly thrilled by this new action-packed shounen. But we’re getting ahead of ourselves. First, we need to go back a little and explain exactly what makes WIND BREAKER so special. Join us today on Honey’s Anime as we review WIND BREAKER by Nii Satoru!

Mangaka Nii Satoru is no slouch — this is their second manga series, after their gender-bender sports shounen Danshi Bado-bu ni Joshi ga Magireteru (Secret Badminton Club). WIND BREAKER is their first work translated into English, and it stars Haruka Sakura, a delinquent first-year high schooler who’s moved to a new town to attend Furin High School. This particular school is known for thugs and brawlers, and Sakura intends to fight his way to the top to prove his inner strength. But Sakura’s desires and worldview are challenged early on, when he realizes the students of Furin — nicknamed “Bofurin” (we’ll get into that in a minute) — are seen not as punks, but as the town’s protectors. In these rough, dangerous streets, it’s the teenagers of Furin High School that keep other gangs out of their territory. Brawling’s not the only thing they do — the Furin students also help the elderly, clean up graffiti, and otherwise act as true guardians of the town. All of this comes as a complete shock to Sakura, especially when he gets involved in a brawl and is lauded as a hero, rather than criticized as a punk. His distinctive half-white hair and heterochromia (different-colored eyes) have always drawn trouble, and he can’t fathom being praised nor truly loved. There’s undoubtedly a huge character arc kicking off in the first volume, but we’re off to a fantastic start with Sakura’s motives and personality. WIND BREAKER’s name is cleverly layered in multiple ways. “Bofurin” in Japanese means “windbreak,” and usually refers to a forest that protects a town from severe winds. There’s more here, however, as “Furin” itself means “wind chime” — the quintessential Japanese chimes that often hang on balconies, and are used at temples to ward off evil spirits. In English, of course, a wind breaker is also a type of jacket — the very same type that Sakura himself wears. Linguistic beauty! And speaking of beauty, this is an impressively drawn manga, with clean action lines and character designs, but detailed grungey backgrounds. The “broken dreams” of this town are palpable, with graffiti and closed-down businesses. WIND BREAKER isn’t shying away from depicting a town on the verge of collapse being kept together by just the tenacity of its high school kids.

WHY YOU SHOULD READ WIND BREAKER VOL 1 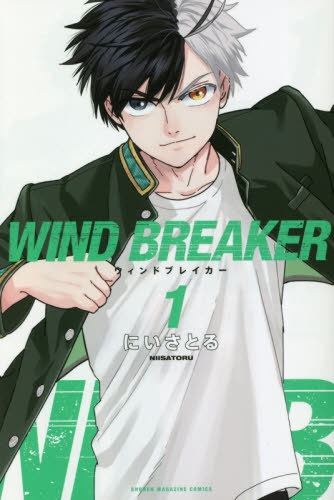 As we said earlier, we think this series is going to become something big. From the tsundere/punk main character, to the expressive and colorful background cast, to the heartwarming story about finding love and acceptance where you least expect it; WIND BREAKER has the makings of an excellent shounen. We’re not alone in expecting an anime adaptation, though! Over at AnimeJapan, a 2022 poll found WIND BREAKER ranked ninth in a list of manga people want to see animated. And with 1.2 million copies sold as of March 2022, WIND BREAKER is off to a commercial success, too.

We hope we’re not overselling WIND BREAKER too much, but read it for yourself and you’ll understand the instant appeal. With clean artwork, excellent characterization, and room to grow in both action and Sakura’s backstory, WIND BREAKER is a dark horse we’re willing to bet on. If you haven’t read this one already, pick yourself up a copy today! And as always, thanks for reading!