In the lead-up to Studio 8-Bit‘s anticipated anime adaptation of Muneyuki Kaneshiro and Yūsuke Nomura‘s Blue Lock manga, Crunchyroll presented a special panel at their Crunchyroll Expo convention on Friday. The presentation (an edited video version of which was streamed through the Expo’s main page) featured a discussion between cast members Kazuki Ura (Yoichi Isagi), Tasuku Kaito (Meguru Bachira), and Yūki Ono (Rensuke Kunigami). Opening with a trailer for the series, viewers were then welcomed to the panel by host Michael Weidner, who gave us a quick synopsis of the story: An ambitious project to whittle 300 high school soccer strikers down to the one absolute best player in the nation . Introducing us to the three voice actors, Weidner went on to ask them questions about the series and their roles.

Opening with the question of what makes the story of Blue Lock so interesting, Ura brought up that the charm was watching these 300 ‘egoist’ characters compete over who has the strongest ego. He mentioned, with the other two actors agreeing, that Japanese people tend to defer to other people, so seeing this kind of strength without regard for others is compelling. Ono agreed that this kind of egoism is “totally out of the norm”, and also mentioned that the adolescent ideal – the idea that advancing your own interests is a good thing – hit home for him. Kaito, for his part, mentioned how adolescent sports series normally focus on working together as a team. So one like Blue Lock, which focuses more on individual advancement, is interesting. “Ugly in a good way,” as he put it.

The actors were then asked how they felt when they first heard they would be getting their roles. Ura’s response: “I just shouted.” He had been following the manga from the first chapter and was a huge fan; he never thought he would actually get this far, and was grateful. In Ono’s case, he mentioned that he had already performed narration and character voices for a promotional video for the Blue Lock manga a few years ago with fellow actor Nobunaga Shimazaki. The two had discussed at that time how fun an anime adaptation of the series would be. Ono had voiced the character of Bachira (Kaito‘s character in the anime) in the promotional video, but even then the character he really wanted to play was Kunigami, so he was really happy to get that part now. Coming to Kaito, he said he was not very good at putting his feelings into words, so he actually surprised himself with the that came out of him when he found out he got the part, even telling himself, “Shut up, me!” The actors all agreed this was a different side from how he normally was.

Weidner then asked the actors how they felt knowing Blue Lock would be simulcasted on Crunchyroll to fans all over the world. Kaito said he was excited, but also felt a lot of responsibility. Ura admitted that he couldn’t picture this aspect at first, especially since he’d never traveled abroad. He couldn’t imagine how people would respond until he saw all the people reacting in tweet replies to the announcement the world over, which made him feel even more motivated. Ono used this opportunity to dig at Ura for never having traveled abroad, which briefly caused the cast members to digress into an aside about where Ura would want to travel now. America was the only place he could think of. Ono, back on-topic, said he recognizes the passion fans in other countries have for anime and voice acting, specifically in how his lame jokes actually got better responses abroad than in his home country! 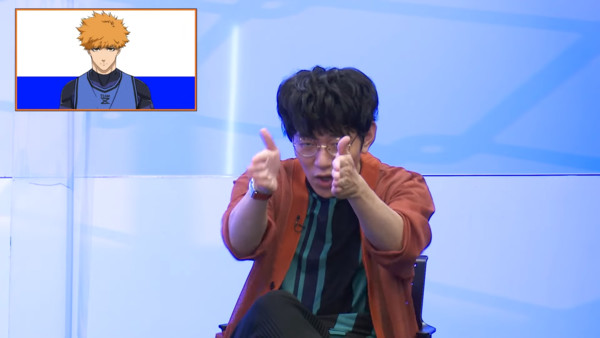 Next, the cast members were asked about their first impressions of the characters they played. Ono noted that Kunigami is very straightforward, a “one-way man.” As a character who’s earnest, single-minded, and quick to tell people off, Ono said that voicing him feels good. But as an older adult, Ono recognizes how precarious that attitude can be at times: that the more straightforward a person is, the greater the risk a disagreement could bring him down. He hopes fans keep an eye on this “quintessentially upstanding man.” Kaito specified that his character, Bachira, is innocent and childlike in a good way. He wondered if he could be friends with his character, given how freewheeling he is compared to Kaito‘s more reserved personality. He noted how he has to piggyback on Bachira’s personality to raise his own energy levels to match playing the character. Ura sees his character, Yoichi, as someone who worries easily, and is the easiest member of the cast to empathize with. Ura noted that while he is frequently related to Yoichi while reading the manga, actually playing the character is a different experience. He had to remember how he felt as a high schooler so he could inhabit the character, and even asked his relatives about kids these days – what apps they used, what they talked about – while thinking about that. This led to a discussion between the actors and the host on the generational differences of messaging apps, the ways they used them, the kinds of phones they used, and so on. Feeling that sort of generational difference informed Ura’s best efforts to change into Yoichi.

Weidner asked the actors if they had any interesting stories from the behind-the-scenes process of recording for the anime. Ura brought up that recording is currently limited to a maximum of four people in the studio at the time, so as the main character, he’s in that studio a lot. It leads to a different atmosphere depending on who’s present. So with older voice actors like Hiroshi Kamiya (who plays the character of Jinpachi Ego) he feels a lot of tension compared to someone like Kaito, who he could relax better around. They talked about how they had “dumb conversations” regarding the characters as high schoolers, and if they’d done any of the kinds of things the characters do when they were in high school themselves. Ono discussed the walks he would go on with Ura, since that was the most convenient way to have conversations, and offer his experienced perspective to the newer voice actor. Ura was grateful for this help, since he didn’t otherwise get to consult much with others nowadays, saying it was “electrifying.”

Finally, the cast were asked who out of them they thought was the most competitive, as well as examples of when they themselves were competitive. Kaito thought Ura was egoistic, citing the fact that he walked into the studio to start recording with nearly the entire script memorized. He had a lot of passion for the material, and could be seen carefully noting down all the direction he received. Kaito found this inspiring, which Ura took as quite the compliment. In Ura’s opinion, Ono was the biggest egoist, calling him by his full name here, which got an amused reaction from Ono. Ono apparently told Ura when they first met that he had been working out, adding to the determination of the experience of voicing his character. Ura, who had been working out himself, felt he could look up to Ono’s determination and enthusiasm. Ono admitted that, as someone who had used to play soccer himself, he might have wanted to get back to that build as an inspiration, and had lost over 20 kilos in just two months with that exercise. Noting that this marked him as the type to go all-in on something, he admitted “Maybe in that way, I’m egoistic,” confirming with all of them that it was he who was most competitive. 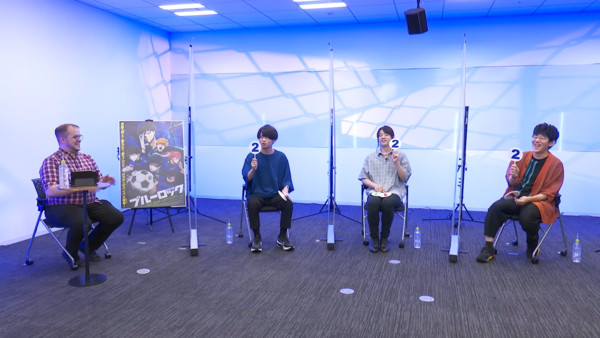 The panel then transitioned to a competition to decide who the “Number One Striker” among them was, mirroring the competition from the series. This took the form of a “World Soccer Trivia” contest. The actors were to hold up numbers to show their answers to multiple-choice questions, but unfortunately, Crunchyroll‘s streamed version of the panel did not actually include those answers visualized for the audience, nor were they read or specified for the viewers. The actors answered near-unanimously for most questions, and got most of them correct, but much of the experience of seeing them discuss how they deduced their answers were lost when we couldn’t see what the options for those answers were. At least there was some entertainment value in seeing them panic at the questions and ask for more time to answer – the rapport between them comes through well.

At the end of this segment, the scores were set at Ura with 10 points, Kaito with 10 as well, and Ono with 9. This led to one more game: a chance to win the whole competition by telling the audience everything they thought was great about Blue Lock in one word. The winner would receive 100 points, meaning Ono had the chance at a comeback. The actors wrote words embodying their answers on whiteboards. Kaito, who was “not very confident” at his effort, answered with “Top”: the idea that reaching for the top captured the desire for both the manga and anime to become the number-one series. He even included an illustration: Mt. Fuji, the “Top of Japan”. Ono wrote “Eat”, reasoning that eating is what motivates everyone in Blue Lock to make them great. High school students have huge appetites, he noted, and they receive food as rewards for winnings. Personally, he also brought up that he was born under the sign of the “God of Eating”, and his character, Kunigami, has the word for God, “Kami”, in his name, which made it a vital part of his performance . Ura wrote down an entire string of words, “I’m Strong Power Egoist Football”. He had so much to say about what he makes Blue Lock unique, but in going overboard here, he was given a “Yellow Card” by Weidner. In the end, Ono was declared the winner, giving him the victory overall with 109 points.

As the panel ran out of time, each actor was asked for a message to the viewers regarding the anime. Ura talked about how all kinds of people were pouring their hearts into the anime, and all the kinds of captivating it has. He said he hopes viewers are looking forward to the anime, regardless of if they knew the manga or not. Kaito noted how Blue Lock was a popular series, with lots of people passionately and thoughtfully engaging with it from the moment the anime was announced. He is trying his best to convey the charm of the series to everyone. Ono mentioned how he’d previously said that the eating was one thing that made Blue Lock great, but as with Ura, he couldn’t possibly express everything about the series. He talked about how the producers have been telling him already how good the anime is. One more point he had was that he thought it would be good for the people of Japan to engage with soccer with Blue Lock‘s egoist attitude, that it might motivate Japanese soccer to reach that World Cup stage. With that, the group thanked everyone who had come to see the panel, and encouraged viewers to watch the series on Crunchyroll.