If anyone ever asks you how many The King of Fighters games there are, resist the temptation to say fifteen. That may be the number on this latest flagship entry, but this is a vast and complicated series with many, many spin-offs, handheld versions, remakes, side stories, 3D versions, and even the Fatal Fury titles that technically started the King of Fighters tournament. It’s enough to invite sympathy for anyone making a new game in this extensive universe. No matter their efforts, it can’t possibly include every character, every move, and every good idea the series ever had.

The King of Fighters XV sure tries, though. It strings together the three major arcs of the series, integrates the ancient evils of the early Orochi Saga, nods at the clone technology of the Nests Saga, and brings back the Ash Crimson Saga that actually seemed to wrap up nicely in The King of Fighters XIII. And since fighting games operate on the same elastic mortality as superhero comics, The King of Fighters XV is free to bring back familiar faces like the eponymous Ash and the entire Orochi team of Chris, Yashiro, and Shermie.

The initial roster is just shy of 40 playable characters, and a few big names are left out. They’ve just been shifted around: protagonist Kyo Kusanagi now joins a team with rival Iori Yagami and fellow Orochi hunter Chizuru Kagura, while Kyo’s former teammate Benimaru Nikaido joins up with headphones-sporting Shun’ei and the narcoleptic Meitenkun, two The King of Fighters XIV newcomers seemingly promoted to star status. Other teams trade off members here and there, with only two all-new fighters in the mix: graffiti artist Isla appoints herself as Shun’ei’s fierce and inexplicable nemesis, while the bespectacled Dolores provides calmer tones, earth-based attacks, and plenty of plot exposition.

Team play was always the core of The King of Fighters: pick three names from the voluminous cast, decide the order, and face off with other teams one matchup at a time. The King of Fighters XV Lacks the tag-team element of a few previous games, concentrating on the dedicated one-on-one face-offs between characters. And once again there’s a wide variety of play styles: Kyokugen karate devotees Ryo, Yuri, and Robert will be familiar to anyone who’s tried a fighting game in the last thirty years, but more complex moves await with Whip’s various combos, Clark Still’s multi- part throws, or Angel’s extensive chain attacks. The controller motions are all relatively simple as 2D fighters go; Newcomers used to the button jabbing of Tekken might be lost, but overall the moves aren’t hard to pull off on a technical level—it’s the timing and reflexes that you’ll have to learn.

To that end, The King of Fighters XV openly invites fresh or inexperienced players. The automatic combo system of the previous game is refined and expanded upon here: repeatedly pressing one button will make your character launch a string of hits and, if they connect, end it with a special move free of any taxing input. It sounds like the sort of Killer Instinct idea that would make the game too easy and shallow, but SNK doesn’t give that much away. You’ll still have to connect with a jumping attack or a similar blow to initiate the combo, and regular special moves are much more useful and devastating. It’s also easy to block a combo and punish your opponent, keeping button-mashers from abusing the system too much.

The King of Fighters XV further enhances things with a new “Max Mode” feature that boosts a character’s attack and defense for a brief period, recalling the TOP system of Garou: Mark of the Wolves, while the Max Mode Quick option works the feature into combos. The game also introduces the Shatter Strike command, a simple motion reminiscent of…well, okay, it’s almost exactly the same as Street Fighter IV‘s focus attacks, stunning the opponent and leaving them temporarily open to whatever you might unleash.

SNK‘s fighting games thrived on their looks, the lovingly rendered details in backgrounds and character animation, and The King of Fighters XV comes as close as it probably could. The characters all look sharp, greatly improving on The King of Fighters XIV (the rare fighting game that needed a post-release patch to look halfway decent), and the stages are handsome vistas that range from jungle scenery to an elaborate Metal Slug Tribute with tanks and POWs and Rumi Aikawa saluting. Yet it’s never as gorgeous as the hand-drawn animation of The King of Fighters XIII and other older titles. 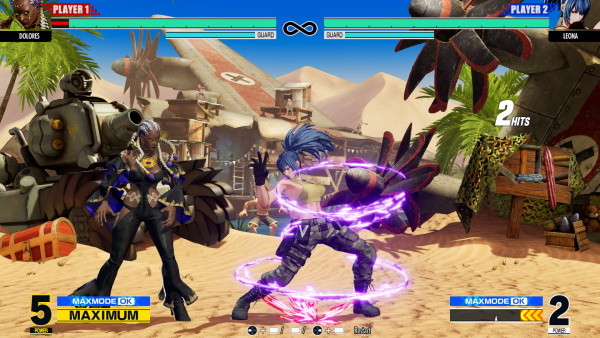 It’s hard to call a game bland when it has a hero who delivers giant ice ghost-punches with one hand and fire strikes with the other, but longtime fans of the series will find everything just a little less energetic; staples like Athena’s perky magical-girl mannerss and Iori’s three-part victorious cackle seem lifeless here. In fact, The King of Fighters XV borrows a lot of its style: character introductions recalls the cartoonish close-ups of Street Fighter IV and Vwith a grandiloquent announcer who’d fit right into Soul Calibur. It’s still appealing, but at their best The King of Fighters games defined their own style and traditions.

The King of Fighters XV lets players celebrate one series tradition: complaining about the roster. With 39 characters at the outset and six more already in the DLC pipeline, the game lags just behind KoF XIV‘s massive lineup. Of course, any King of Fighters fan could list a dozen of their favorite underappreciated entrants (bring back Miu Kurosaki from EX2: Howling Blood or Luise Meyrink from the horribly undervalued Maximum Impact 2I say), and SNK has to draw the line somewhere. Yet even some longtime series fixtures, like Kim Kaphwan and his ex-con disciples, are curiously absent.

It’s also surprising that most of the new characters from The King of Fighters XV weren’t invited back. The entire South American team is gone, while SNK Apparently took fan criticisms of the garish Sylvie Paula Paula so seriously they removed her. And what of poor Alice, who spent decades appearing in King of Fighters Dating sims and backgrounds, only to get cut right after her proper debut?

For those who track their favorite characters through the series’ varied subplots and relationships, The King of Fighters XV preserves that focus on narratives and character interactions. It lacks The King of Fighters XIII‘s incredibly comprehensive pre-match interactions for every possible pairing, instead focusing on a smaller amount of conversations between certain characters. The final bosses are pleasantly atmospheric and brutal opponents, and the endings are a mixture of strangely protracted jokes and hooks for future entries. 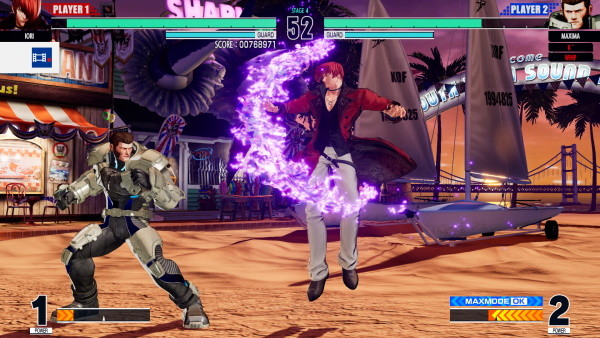 If the game skips characters and leaves a few storylines unresolved, it doesn’t neglect the soundtrack. A DJ Station receives new music when you finish the game with certain teams, gradually revealing an extensive history of King of Fighters music for your custom in-game soundtrack. It doesn’t sample every game (Maximum Impact 2 may never get its due), but it’s one of the neatest unlockable features a fighting game offers, and it sells the single-player mode almost on its own.

Those worried about versus play shouldn’t worry, either. Many a modern fighting game has stumbled due to flawed online matching and bad connections, but The King of Fighters XV has an apparently solid rollback code experience (on the PlayStation 4, at least) and a nice spate of multiplayer options.

In fact, the biggest problem with The King of Fighters XV isn’t within the game. In 2020 the Electronic Gaming Development Company purchased a 33.3 percent stake in SNK. The EGDC is a venture of Saudi Arabian crown prince Mohammad bin Salman, who news reports connect to human rights journalist and the conspiracy to murder Jamal Khashoggi. That may not affect the content of The King of Fighters XVbut it’s something even the most apolitical fan should keep in mind.

The King of Fighters XV doesn’t find the series at its prettiest, boldest, or most densely populated and varied in characters. Yet this might be the most accessible it’s ever been: easy to jump into, complex once you’re at home with it, and backed by a solid online experience. SNK clearly wants The King of Fighters to bring in new blood and please the old guard all at once, and this fifteenth (with an asterisk, of course) outing manages to be almost everything a fighting game should be.