♪Now I’ve heard there was a secret show
That HIDIVE streams, but no one knows
But you don’t really care about it, do you?
It celebrates the 25th
It sometimes falls, but always lifts
Now all the fans should go watch Hareluya
Hareluya… Hareluya… Hareluya… HARELUYA II BØY♪

On December 2, 2021, HIDIVE started streaming an anime called HARELUYA II BØYa show from 1997 that had effectively been forgotten with time, as even in Japan it still has never received a complete physical release on anything better than VHS & LaserDisc. What exactly is HARELUYA II BØY, where in Heaven did it come from, and why should you even care about it today? Hey there, anime aficionados, this is George from The Land of Obscusion, and allow me to introduce all of you to the history of HARELUYA II BØYand why its anime is definitely worth a watch today, especially if you loved something like Gintama or Skate Dance.

Born in 1966, Haruto Umezawa got his start in manga as an assistant to Tsukasa Hojo during City Hunter‘s run in Shonen Jump, before making his debut as a mangaka in 1990 with the short-lived Sakenomi Doji. Afterwards, he created a one-shot called Hareluya that appeared in the 1991 Shonen Jump Summer Special, which then got picked up for a serialized run that started in mid-1992. This manga told the story of Hareluya, son of “God of the 20th Century” Harebare, who was set to become “God of the 21st Century”. However, Hareluya is a petulant teenager (in god years) who cares not for humanity, and thus Harebar decides to cast his son down to the mortal realm to live as a human, so that he can learn humility.

sorry, Hareluya would only last 10 chapters in Jump before getting canceled. Umezawa, however, must have felt that there was still potential in the characters he had created, as just 8 issues later Jump ran a one-shot by him titled HARELUYA II BØY, which completely reimagined the titular lead as a teenage delinquent: Hareluya Hibino, who cockily calls himself “invincible” & dreams of “world domination”, though in reality has a heart of gold & is willing to help out those in need, especially if it allows him to beat up those who do others wrong. Alongside him are his friends Kiyoshiro Okamoto (who dreams to be a painter), Makoto Ichijo (who dreams to be a rock star), & Michiru Yamana (who dreams to be a jewelry maker), all of which are reimagined takes on “God Hareluya’s human friends from the first manga. The one-shot would then lead to a serialized run that began 7 issues later at the end of 1992, and BØY (as it’s technically known as in Japan) would run all the way until the start of 1999 for 296 chapters & 33 volumes, making it the fifth-longest manga to debut during the “Golden Age of Shonen Jump(1983-1996), & Umezawa’s longest manga to date. For those curious, “BØY” is a reference to the legendary J-Rock band BOØWY (pronounced “Bowie”), while also showing that this “second Hareluya” was in fact a normal human boy, not a god. However, the “invincibility” of BØY‘s Hareluya wasn’t mere bravado, as he would constantly get back during a fight, no matter how painful & devastating the blow he was took. Also, I’d argue that, on a visually aesthetic level, BØY is to Jump in the ’90s what Kimagore Orange Road was in the ’80s – that is to say, this series looks like “Japan in the ’90s.” 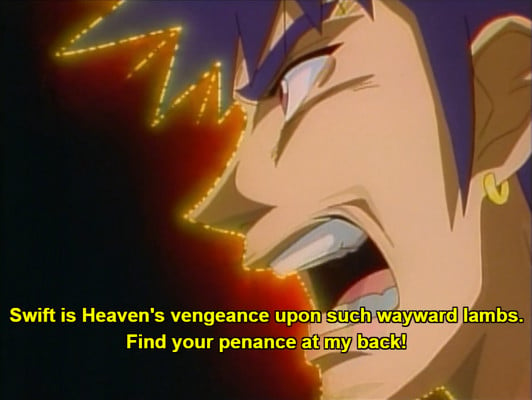 On April 8, 1997, a 25-episode anime adaptation of HARELUYA II BØY debuted in late-night on TV Tokyomaking it one of the earliest examples of the late-night anime infomercial that started with late 1996’s Those Who Hunt Elves and remains until today the format for how the vast majority of anime is produced. This was the TV debut for animation studio Triangle Staffas well as the late-night debut (& sole jump adaptation) for head writer Yasuhiro Imagawa (Mobile Fighter G Gundam, Giant Robo), with this being his second time in charge of series composition. However, while the BØY anime is overall accurate to the general style & themes of Umezawa’s manga, Imagawa & his writers did change around some things, including one that has resulted in some confusion online.

You see, the very first thing seen in the HARELUYA II BØY anime – even before the OP starts playing – is what looks like “God Hareluya” flying uncontrollably through space before heading towards Earth. This has resulted in the few who did have some idea as to this show’s existence outside of Japan, prior to HIDIVEmistaking the original Hareluya manga‘s plot as being an important part of this anime’s plot. However, it’s really nothing more than a fun shout-out to Umezawa’s original series, and outside of Hareluya Hibino occasionally talking in more a biblical way at times (including a new catchphrase “Find your penance at my back!”), light emanating from behind him whenever he pulls something out from behind his back (and the fact that he can seemingly pull anything out now, instead of just the frying pan or baseball bat of the manga), and one or two visual gags, the anime made no further reference to the original “Son of God” concept. The only exception would be the final episode, which does play into the original concept & has an absolutely bonkers finish, but that’s handled in a way that leaves it entirely up to the viewer’s own interpretation, and the post-credits scene (which I’ m sure few outside of Japan have actually seen) gives it all away. 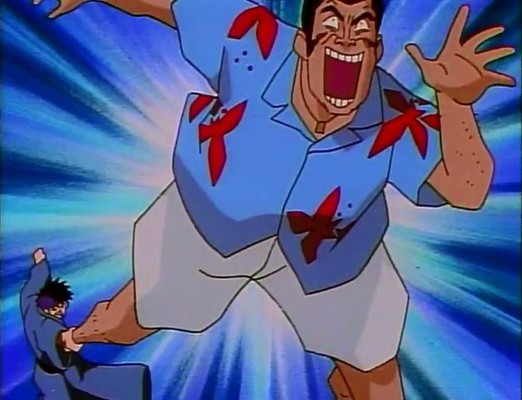 To that I say “Yes, but it definitely isn’t a looker”. Those early days of “modern” late-night anime were notorious for being produced on the cheap, since it was all still an experiment, and while some managed to still come out looking alright, BØY isn’t one of them, despite some moments where it looks decent. While HIDIVE‘s stream does use the home video version, which features some bits of improved animation over the broadcast version, it’s still a chintzy-looking show on the whole even for its time. It’s also obvious that the series has never been remastered in any way in Japan, even digitally, as HIDIVE‘s stream has a notably soft image; who knows if the original masters even exist today. Watching the show, you’d be hard-pressed to find any proof that this was done by the same studio that had made Macross Plus a handful of years prior and would later make Serial Experiments Line & NieA_7and those who are laser-focused on the actual animation itself when it comes to watching anime will find little to like here, visually.

However, those who can look past the chintzy animation will find that pretty much everything else in the show is absolutely outstanding. Our lead cast is instantly memorable & their friendship feels very real & natural, with Hareluya & Ichijo being vitriolic best friends, Kiyoshiro being the most willing to instantly help others, & Yamana often being the “Team Mom” of the gang. The budding feelings between Kiyoshiro & Yamana are also very natural, and it never feels like they rush towards becoming a full-on couple. The occasionally appearing supporting cast of Harebare (now a priest), street artist “Grandpa Bob”, Rakuen High School bancho Shozo Momiyama (often the de facto fifth member of the gang), & local sukeban Reiko Ibu (who winds up falling for Ichijo , much to his dismay) are also a lot of fun to watch, while the various characters that appear in the (mostly) episodic stories range from decent to instantly memorable in their own right; It’s impossible to forget someone like the skeevy transfer student Reiji Marukido. The writing by Imagawa & his staff is also very solid, mixing together comedy and drama well & delving into subjects you normally wouldn’t see in a Shonen Jump series (at least, for its time), including a handful of moments of sexual coercion and/or assault that Hareluya & the gang have to put a stop to. This was the first Jump manga to be given a late-night anime, so Imagawa likely felt that they should push the envelope a little. That said, how well those situations are handled will definitely differ depending on your perspective; This is a show from the late 90s, after all. 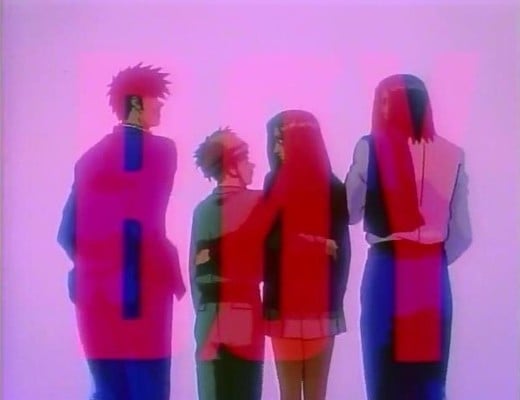 Also of note is the stellar soundtrack by the late Shingo Kobayashi, which features an excellent mix of synth, strings (including both piano and harpsichord!), winds, and straight-up rock. Said rock comes courtesy of Duran Chapee & Vincent Penn, calling themselves “Hallelujah Boys”, and is easily the highlight of the instrumentals, including rock renditions of classical music like Bach’s Toccata and Fugue in D minor and, of course, Händel’s Hallelujah Chorus. Finally, there’s the music by SPYKEa rock duo that had recently signed with King Records and is all over this anime, including being the in-universe sound for Ichijo’s band, Fire Guns. There’s the OP theme, two ED themes, and SIX INSERT SONGS heard across 8 episodes! Personally, I absolutely love every single one of SPYKE‘s songs in this anime, though the highlight is easily “Before Lies”, the only one played in multiple episodes (14, 20, and 25, if you’re curious). Ironically, though, despite King Records blatantly using HARELUYA II BØY As a way to promote its new signing – right down to Episode 1’s ED footage being nothing but a SPYKE music video – the duo would break up without ever releasing anything beyond two singles, and the two OST releases for BØY would wind up doubling as the closest thing to a SPYKE album from the company, though guitarist Hironori Morikawa did also contribute two acoustic renditions of SPYKE‘s songs for the show. We’ll end with the great voice cast, which includes the likes of Yūji Ueda as Kiyoshiro, Katsuaki Arima as Ichijo, Urara Miura as Yamana, Hiromi Tsuru as Reiko, Kiyoyuki Yanada as Momiyama, and a constantly scene-stealing performance by Shinichiro Miki as Hareluya, alongside episodic roles by the likes of Kazuki Yao, Nobuyuki Hiyama, Hiro Yuukiand Toshihiko Sekiamong others.

Trust me when I say that HARELUYA II BØY getting licensed for English release was absolutely an instance where water was squeezed from a stone, and I had to take this chance to write about a title that’s absolutely in my wheelhouse actually becoming easily available for people to watch with a proper English translation. Again, it definitely isn’t perfect, but those who can forgive this show for its visual sins will find what is absolutely the spiritual predecessor to Gintama and Skate Dance. While Yasuhiro Imagawa‘s script may not be 100% accurate to Haruto Umezawa‘s original manga, it’s still on the whole very fun, enjoyable, and stars an instantly memorable cast. Combined with the outstanding music and voice acting, what results is a show that definitely is worth checking out, even 25 years later. 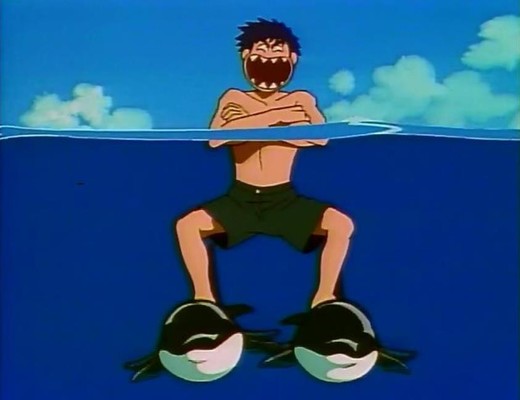 In my opinion, Hareluya Hibino is one of the most charismatic & memorable leads in Jump history, and if you do him or his friends wrong… then find your penance at his back!