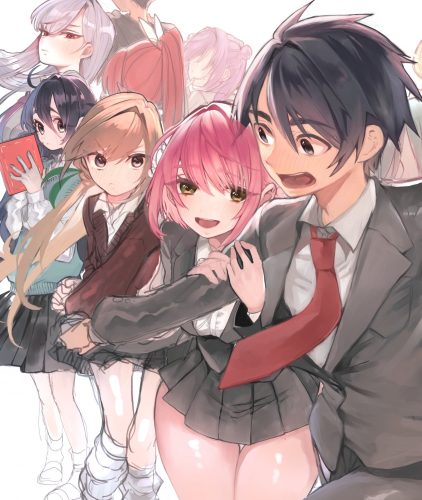 No Sore Losers in This Harem

What if the god of love made a mistake, and you were mistakenly rejected by your crush? What if you’d confessed to one hundred girls and had every single one of them reject you?! That’s the life of Rentaro Aijo, a first-year high-schooler who had his destiny corrected by visiting a shrine, and will now meet one hundred soulmates. If he doesn’t return their love, they’ll meet with a horrible fate.. and so begins Rentaro’s harem comedy experience! In all honesty, this sounds like the setup to the type of… ahem, adult… manga we can’t talk about on Honey’s Anime, but somehow Kimi No Kotoga Daidaidaidaisukina 100Nin No Kanojo (The 100 Girlfriends Who Really Really Really Really REALLY Love You) manages to avoid coming off as a sleazy dream. Instead, we’re given colorful characters, hilarious fourth-wall-breaks, and a surprisingly fresh deconstruction of the usual harem setup. Join us today on Honey’s Anime for our review of The 100 Girlfriends Who Really Really Really Really REALLY Love You, Volume 1!

Harem subplots in romantic comedies have one glaring issue. Although it’s entertaining to see a guy surrounded by gorgeous girls fighting for his affection, there always has to be a singular winner. Undoubtedly this leads to disappointed readers who didn’t get their chosen ship; At best, it’s simply frustrating, and at worst, it can create a negative community backlash — such as in Go Toubun no Hanayome (The Quintessential Quintuplets). 100 Girlfriends (forgive our aching wrists) reinvents the harem genre with an actual polyamorous relationship, where each girl — well, at least the three we see in Volume 1 — is given equal status and equal love. It’s unusual to see, and neatly solves the upcoming issue of Rentaro’s one hundred soulmates without resorting to ridiculous scenarios or having our main character lie to the women who love him. All three of the girls introduced in Volume 1 have their own distinct personalities and gorgeously unique designs, so there’s no chance of you getting them mixed up. The artwork is clean, with plenty of full-page panels and visual gags that really enhance the overall comedic tone. 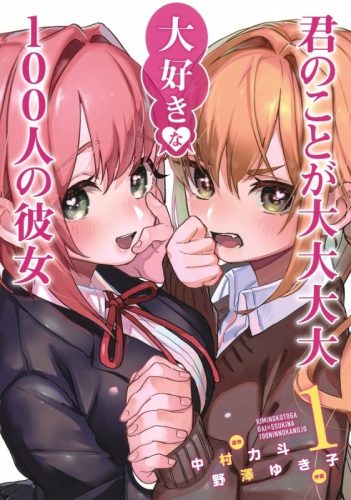 100 Girlfriends knows it has a ridiculous premise, and the volume is filled with hilarious fourth-wall breaks acknowledging the plot line, criticizing characters for wasting panel space, and even calling out tropes such as the “generic, nameless friend”. Although fourth-wall breaks have become more frequent in comedy manga lately, having the characters refer to themselves within the context of the manga is still unexpected and hilarious.

For better or worse, there’s no getting around it: at its core, 100 Girlfriends is a self-indulgent harem comedy. Even with the self-referential humor and a tongue-in-cheek approach to the whole affair, 100 Girlfriends is truly a harem dream — so if that’s your thing, you’ll definitely love this manga. Not only does 100 Girlfriends offer the usual harem comedy — girls bickering amongst themselves, classic “boob size” gags, etc. — but the polyamorous aspect means that everyone wins, and you get to see all of the girls without the dramatic tension of hoping your favorite comes out on top.

As usual with manga reviews, taking just Volume 1 on its own makes predicting the lifecycle of the series pretty hard. There’s every chance that 100 Girlfriends could become an incredibly popular mainstay of the harem comedy genre, or it could enter the teething problems we’re currently seeing over in Kanojo, Okarishimasu (Rent-a-Girlfriend). Ultimately, with such a lofty goal — one hundred girls, each being Rentaro’s soulmate — there’s a warning bell in our minds that this could quickly get stale without a direct plot. How often will a new girl get introduced, added to the polyamorous dating group, fight with the others, make up, then become part of the ‘gang’? Perhaps the problem will be solved by following one specific group of girls rather than focusing on them all, such as how Komi-san wa Komyushou Desu (Komi Can’t Communicate) solves the issue of Komi making 100 friends.

As huge romantic comedy readers, we love that the dramatic tension between characters vying for affection creates a natural ‘competition’ that leads to, well, a plot line. 100 Girlfriends has deviated from that usual plot structure, but with only a singular volume to review, we’re not sure yet whether this unique take on the harem sub-genre will turn into something incredible, or whether it’ll fizzle out over time . That said, if you love cute girls, laugh-out-loud gags, and a harem relationship without anyone feeling bad, you might really really love this manga! (See what we did there?) That’s our review for Kimi No Kotoga Daidaidaidaisukina 100Nin No Kanojo (The 100 Girlfriends Who Really Really Really Really REALLY Love You)! Are you going to pick it up? Let’s talk down in the comments below, and as always, thanks for reading!