Japanese animation studio, Studio KAIcame to Anime Expo and kicked off their first ever panel. The young studio just hit its third-year anniversary, and the staff were excited to share their newest title, FUUTO PI. They did not expect to see so many people in their panel and asked to confirm if the audience could check if they were in the right place. Through a bit of trial and error, the panelists found out that most of the people in the room were big Kamen Rider fans and were in the right place for FUUTO PI. By a show of hands, roughing 60-70% of the room has watched Kamen Rider.

Without skipping a beat, the panelists ran through a slide of anime that they recently worked on: Uma Musume Pretty Derby Season 2, The Prince of Tennis II: U-17 World Cupand Shine Post. Getting to the meat of the panel, they moved onto showing their latest trailer for FUUTO PI and confirmed an August 1 broadcast on TV and Crunchyroll. Series director Yosuke Kabashima, whose previous work was on Uma Musume and Accel Worldand producer Daisuke Furuya joined the panel onstage.

Expecting most of the panel to not be full of tokusatsu fans, Studio KAI prepared a short video on the legacy of mangaka Shotaro Ishinomori and the history behind Kamen Rider. Starting from the manga to the live action lore, the informational showed the history of Kamen Rider that led to FUUTO PI. Kamen Rider W was the start of two people sharing one Kamen Rider identity, sometimes to a humorous effect: one of the two will get absorbed as they transform into Kamen Rider.

Moving onto a behind the scenes footage of the creation of FUUTO PIdirector Kabashima explained the manga takes place after the Kamen Rider W TV drama. Although anime is a different medium, he wanted people to feel like they’re watching Kamen Rider W. The video featured other members on the staff, including the character designer. Regarding character design, he struggled to get the silhouette right. They had to tweak proportions, so the head is smaller compared to the body. Because the color scheme of the characters is unique, color designer—Sayoko Yokoyama—made sure that the colors don’t pop too much during nighttime scenes to deep evening colors. She was challenged with the task to make six colors work well together.

Kabashima added that the difference between the live action and animation is that in live action, one shot takes are impossible with sets because there’s nothing on the other side. However, that’s an element he wanted to be able to do in the anime. He tasked his staff to be able to design a setting that the audience can walk in, out, and around. 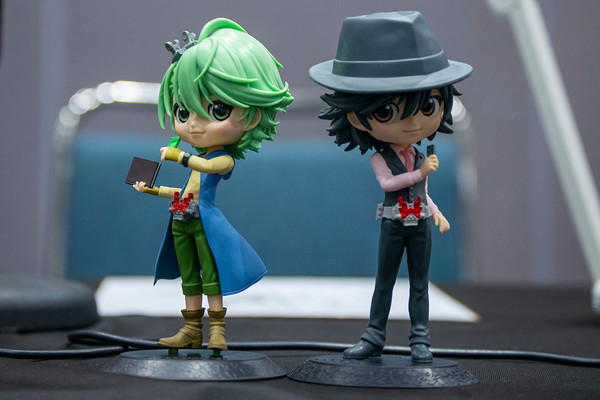 Then, the two voice actors shared their thoughts on Shotaro Hidari and Raito “Philip” Sonozaki. Yoshimasa Hosoya sees Shotaro as hardboiled detective. Philip is Shotaro’s partner and he’s Shotaro’s foil as a coolheaded, research driven individual. However, Kouki Uchiyama shared that Philip is single minded when he finds something he’s interested in. He loses his cool and gets passionate in the moment. When voice Shotaro, Hosoya didn’t let his mental state weigh too much otherwise his casual lines would sound too weighty. Uchiyama shared that the audience can watch FUUTO PI as a Kamen Rider story or as just a mystery story. The anime mood changes episode by episode, and he came out of the booth feeling those variety of emotions.

Once the special videos concluded, they went had a Q&A session with the panelists with questions from Studio KAI and then took questions form the audience.

Could you please explain how Studio KAI decided to take on this new series?

Daisuke Furuya: I’d like to mention something. You just watched the making of FUUTO PI, but this is the first time we’ve ever showed any visual of the anime. I know the producer of the live action version of Kamen Rider. It started as a great manga, and I decided to talk to Toei to convince them to move it into an anime series. We discussed this in 2019 while we started Studio KAI, and promised that we’re going to gather the best staff for the show. I asked Kabashima to draft up some visuals for FUUTO PI and I showed it to Toeiwho loved it.

What was your impression, director Yosuke Kabashima, when you were told it was being made into an anime?

Yosuke Kabashima: To begin with, I was a huge fan of Kamen Rider since I was young. As an animator, in 20 years, I’ve experienced a lot of things in the industry. During those turbulent times, what helped me was Kamen Rider. All my life, I always wanted to pay back the Kamen Rider series. So, when I heard this plan for the new series, I thought I should be the only one and that only I can do this.

What does “Futo” mean?

Daisuke Furuya: In Kamen Rider W, it’s the city Philip and Shotaro live in. When this series was being made into a manga, we knew we’d reach a wide audience, so we didn’t use the title of Kamen Rider. We wanted to capture a lot viewers and decided not to use the franchise name.

Could you describe challenges that you face and what you enjoyed producing in the show, and what the audience should keep in mind when watching?

Yosuke Kabashima: We did have a lot of challenges, but more than that, we had a lot of fun. Just being able to draw Kamen Rider every day is happiness.

Daisuke Furuya; Some fans may have seen the live action of Kamen Rider And there are plenty of scenes you love from that series. When we made the anime, we wanted to keep that in mind and realize those scenes in animated scenes. Those who loved watching Kamen Rider Wyou will recognize this anime as Kamen Rider W.

The final portion of the panel had Kabashima do a live drawing of Kamen Rider W after the crowd voted between Shotaro, Philippe, and Kamen Rider. Because they were short on time, Kabashima already prepared a line sketch of Kamen Rider. As the audience Q&A drew to a close, the panelists announced one lucky winner would be decided to receive the finished sketch after the panel through a Twitter raffle.