Hunting in Another World With My Elf Wife, I Get the Feeling That Nobukuni-san Likes Me manga also licensed

Seven Seas Entertainment announced on Wednesday that it has licensed The case files of Jeweler Richard light novels, the Hunting in Another World With My Elf Wife manga, and the I Get the Feeling That Nobukuni-san Likes Me manga

Seven Seas will release the first volume of Nanako Tsujimura‘s The case files of Jeweler Richard (Hōsekisho Richard-shi no Nazo Kantei) light novels in September. The company describes the story:

When Seigi Nakata rescued a handsome young jewelry appraiser from a group of drunken assailants, he got more than he bargained for! The appraiser is Richard Ranasinghe de Vulpian, a brilliant and mysterious British jewelry expert. Seigi hires him to appraise a family heirloom…and that is just the beginning. Together, they unlock the secret messages hidden in the hearts of precious stones–and those who possess them.

Tsugimura launched the novel series with the first volume in 2015 under the Shueisha Orange Bunko imprint. The series’ 11th volume shipped in June 2021.

The novels inspired a television anime that premiered in January 2020. Crunchyroll streamed the series as it aired in Japan. 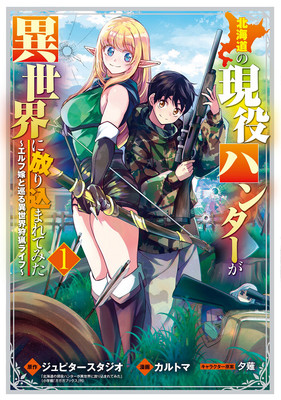 In an attempt to save a child from a wild beast, skilled hunter Shin Nakajima was killed by a bear. But a goddess has summoned him to another world–along with his prized Remington Model 870 shotgun! Nakajima was a member of his local hunters’ association back on Earth, but it’s going to take more than standard skills to protect himself from the fantasy creatures in this place. Enter the beautiful elf Saran, who swiftly comes to his aid: she towers over him, is an elite hunter in this environment, and has a sweet nature that instantly attracts Nakajima. The feeling is mutual, so this unlikely pair is about to become a power couple in the fantasy wild!

Jupiter Studio began serializing the story in the Shōsetsuka ni Narō website in February 2018, and ended it in May 2018. Shogakukan publishing the story in print with illustrations by Yuunagibeginning with the first volume in December 2018. The third and final volume shipped in November 2020. 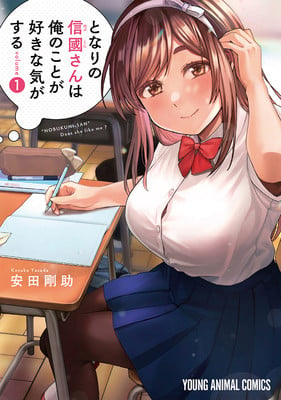 Seven Seas will release the first volume of Kōsuke Yasuda’s I Get the Feeling That Nobukuni-san Likes Me (Tonari no Nobukuni-san wa Ore no Koto ga Suki na Ki ga Surumanga in November. The company describes the manga:

Nobukuni is in love with Sasaki, a boy who sits next to her in class. But how can she get him to notice her? A deep dive into teen magazines and heeding the advice of a cool girl in class gives Nobukuni all kinds of ideas: try to sleep cutely at her desk, flash a little skin, and kindly waft some of her pheromones in Sasaki’s direction. She’s not getting much of a reaction, so she fears it isn’t working–little does she know he’s hiding some secret feelings of his own! A delightful romantic comedy about young passion and the (awkward) act of seduction!