Sasaki and Miyano is a “boy’s life” series about two high school boys falling in love within their everyday lives. The series has earned high praise since its web manga serialization days, and now it has become an anime. ANN spoke to manga creator Shō Harusono and anime director Shinji Ishihara on how they crafted this sweet and mellow series.

You’ve described Sasaki and Miyano as a work where”BLstands for “Boy’s Life.” What does this term mean for you?

Shō Harusono: The reason I use BL as an abbreviation for “Boy’s Life” when talking about Sasaki and Miyano is because of a suggestion by my first editor. I thought it was a great way of expressing how it’s both a story about everyday life as well as a love story between boys. I hope it can be a useful word for people searching for what they want to read.

What’s interesting about the manga is how it combines 4-koma with traditional manga-style panels. Some parts of the story are also told out of a chronological order. How did you decide on this kind of presentation?

HARUSONO: I started drawing Sasaki and Miyano as a hobby. Back then, it was called A Little Story about Sasaki and Miyano. I only drew the bits I wanted to draw; I made the panels compact and concise with the 4-koma [panel] structure.

Later, I got an offer from the editorial department at Gene, and my manga began its commercial serialization. My first editor suggested combining the structure of a story manga and 4-koma for the serialization. This way, the original style would be maintained for the fans who enjoyed the parts I drew to appeal to myself, while the story manga parts would express the feelings of the characters in a clearer way.

The reason there are flashbacks in-between the story progression is because the main focus is on Sasaki and Miyano’s current relationship. I definitely wanted every chapter to have an interaction between the two as the showcase. I also wanted to include some past stories without diluting the main interactions; As a result of that thinking, the story took on a structure that gradually incorporated past recollections like in volume 1. 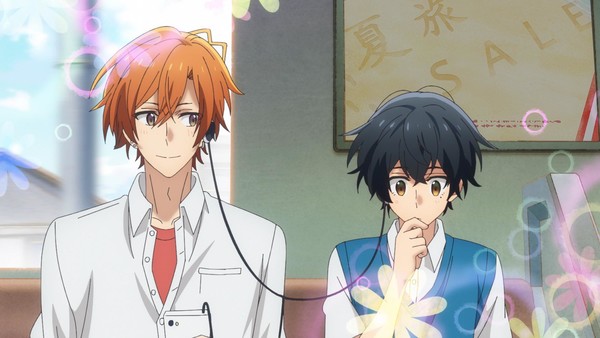 I really enjoy how Sasaki and Miyano has the theme of “getting to know someone through what they love.” What was the inspiration for this kind of story?

HARUSONO: The theme came naturally to me. I myself like listening to people’s stories (like asking a store clerk about their job and what parts they like about it, and from there the conversation flows towards what they like privately). Perhaps that context might have influenced the story.

What was your first impression of the manga?

Shinji Ishihara: I thought it was cute from the moment I first saw the art. The expressions were very charming, and the story doesn’t have characters playing antagonistic-seeming roles, so it was comfortable to read. The characters besides Sasaki and Miyano may be dealing with their own pasts and problems, but seeing them live out their youths casually makes me feel soothed. Also, the parts that are in color leave a strong impression. 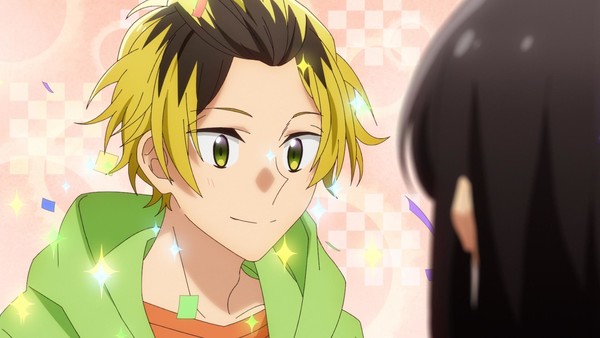 Ishihara: When I decide which titles to direct, I consider the content, not the genre. I think about how appealing the characters are, whether the story is interesting, if I want to try adapting it into an anime, if it’s feasible from a production standpoint, and other things like that. Also, I don’t really read that much manga in my personal life, normally. I hardly watch any anime either. I put my time into films, TV serial dramas, video games, and novels.

What was the biggest challenge when it came to adapting Sasaki and Miyano for anime?

Ishihara: The challenge was working out how to translate the manga’s overall impression into film. I was very particular about depicting the necessary parts of a youth story, like the tone, atmosphere, and the feeling of characters living their lives. Because I relayed some specific reference examples to the assistant director Takehiro Ueno, I think we were able to capture the vibe quite well within the footage. The team has also been working hard on animating the “hands” and depicting the cats, among other things. We’ve also been conscious of live-action dramas when creating the soundtrack for this anime. 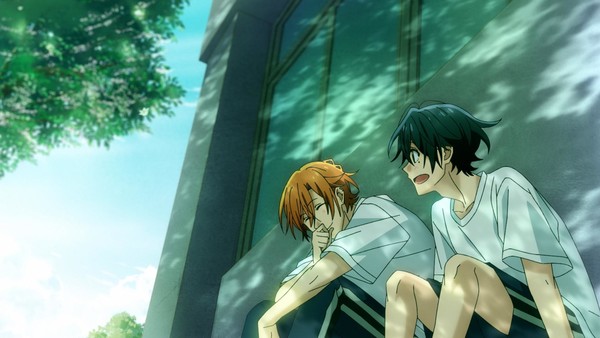 To what degree can you relate to Miyano’s struggle about being a fan of something that he thinks is embarrassing?

Ishihara: I think the definition of “embarrassing” changes depending on the environment and the times, but when I was in middle school, anime was already starting to gain social recognition (it was around when Ghibli works were starting to become hits). In my case, I merely felt a difference within the sphere of acceptable interests. Well, now that I live in an age where even a grown man like me can play games and make anime every day, I don’t think I’ve had much experience feeling embarrassed about my interests. I’m the type who forgets unpleasant things

Do you have any comments for your overseas fans?

HARUSONO: Pleased to meet you! Konnichiwa! I am Shō Harusono. I am very pleased that Sasaki and Miyano is enjoyed by fans around the world. Thanks to the support of fans, the series has received an anime. And because of the powerful support of overseas fans, there are also translated versions of the manga. Thank you so much! Because of everyone who has picked up a copy, I’m delighted that we can release new volumes.

The desire to be liked by the person you like, wanting to be with that person, and wanting to treasure them—that story will be through continued Sasaki and Miyano. I couldn’t be happier if this manga is there for you when you take a break. The world might still be in a difficult place right now, but I hope that you can take good care of yourselves in your day-to-day lives. I’ll do my best from Japan in order to keep creating stories for others to read. I hope we can cross paths again!

Ishihara: The real world may be difficult to live in right now thanks to COVID-19, but I hope that finding a hobby that you can immerse yourself in, such as an anime you like, can make the days a little more fun.

Sasaki and Miyano is streaming on Funimation. The original manga is published in English by Yen Press.