Ubukata was arrested, charges dropped after allegedly assaulting his wife

RWBY voice actress Arryn Zech (Blake Belladonna) posted on Twitter that as a survivor of domestic abuse she is “uncomfortable & very conflicted” regarding the involvement of writer Tow Ubukata in the upcoming RWBY: Ice Queendom anime series. Zech wrote in her Twitter post that she “made her concerns [about Ubukata] known.” Ubukata is serving as the series scriptwriter and responded to Zech’s tweet in English.

I’m sorry to send you a message for this reason. But for your peace of mind I want to convey my innocence. I don’t want to talk about the incident I suffered. Because my ex-wife doesn’t want it.

I don’t know what the news that made you uneasy, but I think the story should exist for the relief and reconciliation of those who have been injured by others.

It is unforgivable for my ex-wife that the Japanese police have done to me. I can’t tell you the details because it’s related to my ex-wife’s life, but I still have a good relationship with my ex-wife and my children…I didn’t have any choice. I just wanted her peace. I’m innocent that my ex-wife wanted.

The Mardock Scramble writer was arrested on August 24, 2015 on charges of domestic violence against his then wife. According to the police, Ubukata’s wife claimed he hit her on her jaw and the area around her mouth. Ubukata allegedly hit his wife’s face in their Tokyo apartment on August 21 at around 7:00 pm, causing her front tooth to break. Ubukata denied the charges, saying “It’s true that we quarreled, but I did not hit her.”

The prosecution released Ubukata without indictment in September 2015 and his wife chose not to press charges. Ubukata spent nine days in jail and wrote a memoir about the experience. 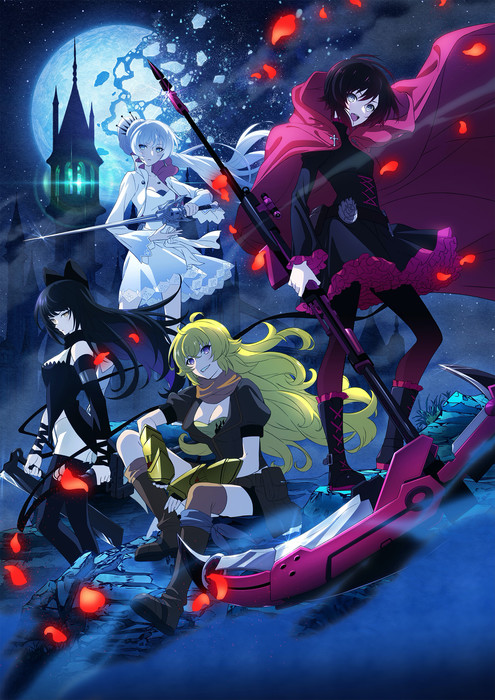 Rooster Teeth announced on Friday that Shaft is producing a television anime series based on Rooster Teeth‘s RWBY franchise titled RWBY: Ice Queendom (RWBY: Hyōsetsu Teikoku) that will premiere this year. According to Crunchyroll‘s removed article, members of the original English cast and the Japanese dub would reprise the roles for the anime.

RWBY: Ice Queendom‘ presents RWBY in beautiful 2D anime visuals. RWBY imagines a world filled with horrific monsters bent on death and destruction, and humanity’s only hope is dependent upon powerful Huntsmen and Huntresses. Ruby Rose, Weiss Schnee, Blake Belladonna, and Yang Xiao Long are four such Huntresses in training whose journeys will take them far past the grounds of their school, Beacon Academy. Though each may be powerful on their own, these four girls must overcome dark forces and work as a team if they truly hope to become the next generation of Remnant’s protectors.

Toshimasa Suzuki is directing the anime at Shaft. Kenjirō Okada is credited as chief director. Gen Urobuchi is credited for conceptualizing the anime, with Tow Ubukata writing and supervising the scripts. huke conceptualized the character designs for the anime, while Nobuhiro Sugiyama is designing those characters for animation, while also serving as chief animation director alongside Yoshiaki Ito and Hiroki Yamamura. Nobuyuki Takeuchi is credited for visual direction. Nobuko Toda and Kazuma Jinnouchi are composing the music.