It’s a little hard to talk about the Story of Seasons games (and their Rune Factory spin-offs). Not because of the complicated legal snarl involving the Story of Seasons and Harvest Moon branding, but because on the merits that most games would be judged by: Rune Factory games simply haven’t been very good. Graphically unimpressive, mechanically stiff and unwieldy, technically varied but messy in its focus and simplistic in its execution, and most dreadfully: entirely too “Japanese”, whatever that might mean this year. And I do bring that up because, aside from the “Japanese” bit, those are some very valid flaws with Rune Factory 5. Walking around Rigbarth, you’ll notice staggering amounts of slowdown when the Switch is docked; the game can scarcely handle so many trees and leaves at once, less so if it’s Spring and the trees are shedding pink cherry blossoms. Operating your farm is a mess of fiddling with a camera that can’t decide where it’s trying to be while trying to position yourself just right to interact with things or even just pick up a single bundle of weeds. There’s a lot to do, but none of it is very in-depth; so much of the game is just mashing buttons.

And that’s okay. Because the important thing is that it all comes together at the end. It’s come together for the Rune Factory games since 2006.

When you first start the game you’ll immediately find there’s a lot you can’t do, which is worse if you’re a returning fan and there’s something you want to do—maybe you just want to farm stuff but can’t because A lot of crops aren’t unlocked yet and your plot of land is too small, or you’re like me and you love forging weapons but you don’t have the forge or the required weapon recipes. There are systems for unlocking these things, and they mesh in very pleasing ways. You can purchase licenses for forging, cooking, or doing chemistry with the points you earn doing villager requests as a member of SEED. You can build the forge, chemistry set, or oven with the lumber and stone that constantly litters your farm. Increasing your skill with tools grants you stat bonuses that makes exploring Dungeons easier. The overall system is still barred off; After all, you can buy only two loafs of recipe bread a day, and you ultimately only have so many daily Rune Points for doing things. But that’s okay, because plants don’t grow in a day anyway. You couldn’t max out a paramour’s relationship points in one day, not without some herculean effort. This isn’t a game about mastery; This is a game about putting effort into things. And in a way, that’s liberating: there’s always something different to do on the horizon.

The key is that the simplistic mechanics are still fun. Combat involves a lot of button mashing, but there are plenty of fun twists like learning extended combos from ranking up your skills in weapons, well-timed dash, or equipped special moves. There are also combination moves you can pull off if you’re exploring with your favorite villager. Fishing is just a matter of tossing in a lure and waiting for a bite, but it’s nevertheless a fun minigame to zone out to. Dungeons are a series of elaborate rooms gated off by hallways with monsters placed at strategic chokepoints, and they come in typical the forest-fire-ice flavors you’d expect from a JRPG. It’s still fun to rush in, dash through a series of bladed pendulums and discover out-of-the-way vegetable monsters that give you packs of seeds. Also, I appreciate that some of the locales bring back remixed music from older Rune Factory games. 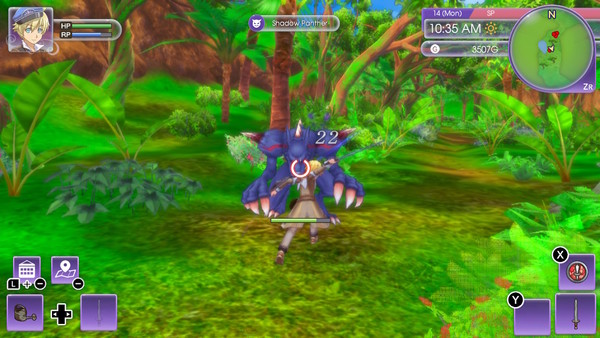 And yes, even though it will take you time to get the licenses for crafting and build up the resources needed to build your crafting tools (not to mention the ingredients for your crafting—can’t make scythes without bronze), it’s rewarding to unlock them. It’s never just another chore dropped on your lap; it’s a new option. What do you want to do today? Do you want to do character quests? Do you feel like forging some tools? Or maybe you want to dabble in chemistry? It’s been a bit since you last cooked, you could stand to make some sashimi with all the fish you’ve caught. Or maybe you want to head out and see if you can tame that one big monster from that one dungeon—if only because riding around on a giant nine-tailed fox sounds like a blast. 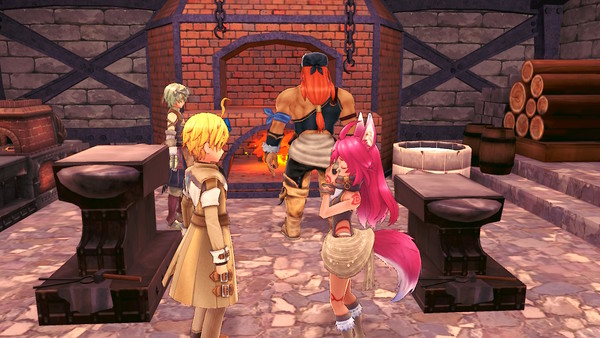 All the while, little events pop up around your town. It’s a village full of colorful, varied characters, from the portly carpenter to the werewolf-girl who can’t speak English. As mentioned earlier, any of these characters can join you in battles and dungeons once you’ve strengthened your relationship with them enough. And of course, you can woo one of the eligible bachelors or bachelorettes, settle down and even start a family with them. The male paramours are certainly more interesting than the female paramours this time around (note: it is a crime that I can’t marry Misasagi or Simone), but in a series first, Rune Factory 5 allows for the same-sex marriages—a long-awaited feature, to be sure. 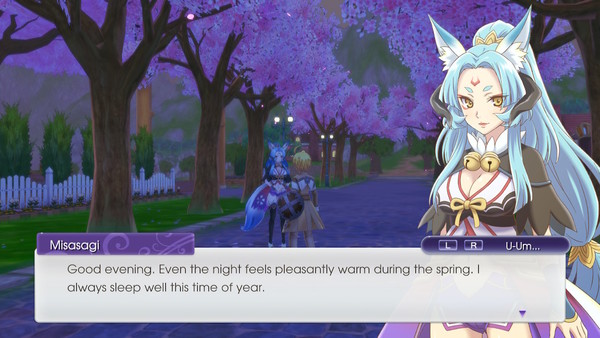 I want to take a moment to also applaud the effort into the vocal side of things; not only does Rune Factory 5 have an extensive English cast, but the game even offers voice actor commentary in the main menu. This is a great addition and one I’m stunned more games don’t feature. It speaks to how much the localization crew loved this game. I also appreciate the subtitles now added to things like the opening music video or even the title screen; anytime an actor says something, you can count on subtitles popping up.

And that’s really Rune Factory 5 in a nutshell. On a purely technical level, it’s a simple game. Performance might even chug sometimes. But you’re not here to be wowed anyway—you’re here to be immersed. You want to plant turnips, you want to play with Woolies, you want to hang out with the not-so-short-but-actually-pretty-beefy dwarves. Who do you want to meet? Where do you want to go? What do you want to do? Pop it in, hit the start button, grab the farming gloves—you’ve got plenty of time to figure it out.