Right Stuf and Nozomi Entertainment announced at their panel at Anime Expo on Saturday that they have licensed the Gundam-san, SD Gundam Sangokuden Brave Battle Warriorsand Gundam Build Divers Re:RISE anime. The companies will release all three series on home video.

That delightfully carefree manga has finally become the anime that all of mankind has been waiting for!
The “Red Comet” is totally naked?!
The pilot of the “White Devil” is struggling with puberty?!
The One Year War and the innovation of Newtypes is nowhere to be seen here. We’re smashing through the narrow walls of the Gundam world!
Let’s test the performance of mistakes born from stupidity!
A short-form anime based on the popular parody comic “Mobile Suit Gundam-san“, serialized in Monthly Gundam Ace!
Come laugh together with Char, Lalah, Amuro, Sayla, and all the rest, in a show that’s more happy-go-lucky than any Gundam series you’ve ever seen before!

Mobile Suit Gundam-san shorts were also shown before screenings of Mobile Suit Gundam: The Origin I: Blue-Eyed Casval in February 2015, and another short screened at the Gundam Front Tokyo entertainment venue in Diver City Tokyo in Odaiba, Tokyo in December 2015. 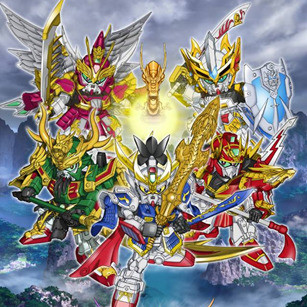 An epic Gundam story based on the popular Chinese classic “The Chronicle of the Three Kingdoms.” Long ago, the Three Sovereigns descended from the heavens to bring order to the land of Mirisha. But times of strife shall arrive, with Mirisha under the rule of a brutal tyrant. When Mirisha is shrouded in darkness, and the people are forced to live in despair, the souls of the Three Sovereigns must be entrusted to the Gundams.

The SD Gundam series is a spinoff of the main Gundam franchise that anthropomorphizes the franchise‘s iconic mobile suit mecha. The spinoff franchise has spawned its own anime, manga, games, and model kits. SD Gundam Sangokuden Brave Battle Warriors is loosely inspired by the classic Chinese historical novel Romance of the Three Kingdoms.

A new anime titled SD Gundam World Sangoku Sōketsuden premiered in July 2019, and was only available previously in 14 countries and territories, including Hong Kong, Taiwan, South Korea, the United States, and Italy. The anime began streaming in Japan on YouTube‘s Gundam Channel in February 2021.

The SD Gundam World Heroes anime debuted worldwide on YouTube‘s Gundam Channel in April 2021, and followed on from SD Gundam World Sangoku Sōketsuden. The anime is the latest in the SD Gundam series. Funimation also streamed the anime. 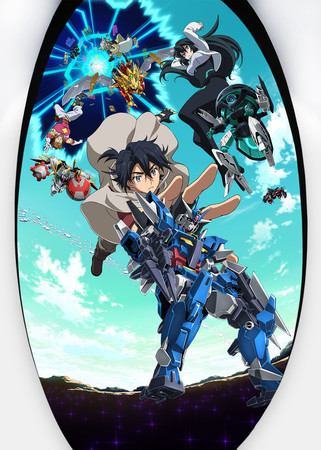 Two years have passed since the legendary force Build Divers battled the second Coalition of Volunteers to save the EL-Diver. Gunpla Battle Nexus Online (GBN), where these events took place, has been upgraded to provide sensory feedback for more realistic play. But as GBN becomes even more exciting, there are Divers who play with their own motivations in mind. Hiroto is a Diver who wanders alone through the Dimension, playing as a mercenary. Kazami is a frivolous, independent Diver who joins one party after another, pursuing the one he admires. May is a solo Diver surrounded by an aura of mystery, who plays Gunpla Battle night and day. And Parviz is a lonely novice Diver who is interested in team play, but out of shyness, he has never managed to seize the opportunity. Each of them is alone, but the course of events will end up uniting them into a new team of Build Divers. What awaits Hiroto and the others is a boundless super-experience that far transcends GBN.