The Gundam universe has no shortage of video game adaptations, and this past week saw the five-day-long network test for Bandai Namco’s newest take on the storied franchise. Gundam Evolution stands poised to be the franchise’s first-ever free-to-play shooter. We were allowed to take part in the network test for the Steam version of the game and experience it first-hand.

As the title implies, players operate as specific mobile suits from across the Gundam franchises The selection of mech units is surprisingly eclectic: while the traditional RX-78-2 Mobile Suit is of course selectable, armed with its beam cannon and hammer, players can also control the Turn ∀ Gundam, the Gundam Exia, the Barbatos Gundam, and even non-Gundam units like the Guntank, the Zaku II, and the Dom. Each unit controls more or less the same, with the main differences being the nature of their weapons and their skills: while most units like the RX-78 focus on ranged weapons, some units like the Barbatos or the Exia focus on melee attacks. Being mechs, each unit has thrusters that allow for dashes, boosts, and hovering, adding lots of complexity to movement. Each unit also features two unique skills with cooldowns, and a chargeable G-maneuver that unleashes a special skill. During our playtime, we specialized in the Turn ∀ Gundam, which featured a charge shot for their beam canon, a personal healing skill, and a grappling attack. In all, there are 14 playable units.

Gundam Evolution‘s network test consisting of simple online ranked matches where teams of six compete against each other. Three gameplay modes will be featured in the full game: Point Capture, Domination, and Destruction. Each mode features teams alternating between Attackers and Defenders, tasked with either carrying out specific objectives or preventing the opposing team from carrying them out. Domination requires Attackers to capture one of three randomly-spawning objectives, Destruction simply requires charging a bomb at a point on the map until it detonates the point, and Point Capture involves occupying a point on the map in order to score points. During our time in the Network Test, we only experienced Point Capture. We also only tested out one map, but there was no shortage of excitement to be had. Further gameplay modes have been promised in the future following the full release of the title. 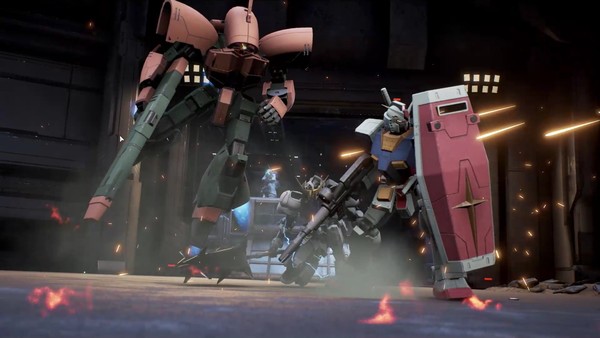 Matches are a good mix of hectic chaos and tense anticipation. A lack of awareness will get you destroyed in short order, thus a keen eye and quick reflexes are essential to survival. It’s possible to rescue downed units before they’re destroyed, albeit at the risk of leaving yourself open to attackers that are no doubt still in the area. Capture points quickly become heated clashes between teams as they’re contested, the ebb and flow of the match varying as units are shot down or respawn to rejoin the fray. A well-balanced match can easily run into overtime as both teams struggle for a foothold above the other. The connections were stable, however we did experience a drop from the network during one particularly heated match. With Gundam Evolution still being tested and refined, we can hope that this problem will be smoothed over.

Gundam Evolution is free-to-play and features an in-game cash shop, as well as a battle pass, alternate skins, and player icons. Old Gundams can be customized with snazzy recolors, while players can set their profile pictures to images of beloved Gundam characters like Amuro Ray or Char Aznable. Skins can also be earned by leveling up with your battle pass; the network test featured an exclusive skin for the RX-78 attainable upon reaching level 20. For the most part, skins seem to be available through a lootbox system, which players buy into via tickets earned from the cash shop or from in-game awards . 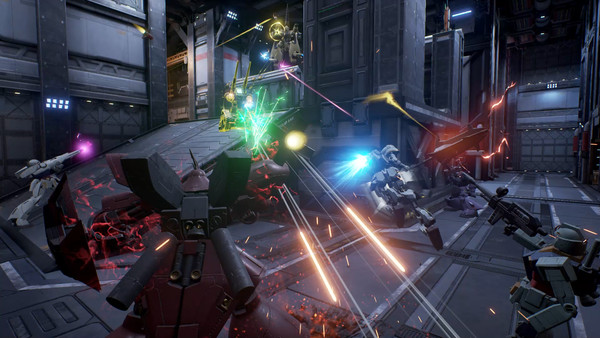 In all, Gundam Evolution‘s network test was a success. While some network issues interrupted the fun and the looming threat of a lootbox system shadows the game, the moment-to-moment gameplay is fun and frantic and the sheer fanservice of zipping through the map as the White Devil, complete with classic Gundam sound effects, is undeniably charming. While a definite release date has yet to be set, players can look forward to Gundam Evolution‘s release later this year on PS4, Xbox One, PS5, Xbox Series S and X, and Steam.