For years, it seems the big ask of Pokémon fans has been that the franchise innovate itself in a meaningful way. Pokémon Legends: Arceus seems to be GAME FREAK‘s response to that request, and I’d go out on a limb to say that it’s exactly the sort of thing we’ve been waiting for. It instills a brand-new energy into these games, fixing their most blatant failings without completely upending the style of play from the main series. For that reason, Arceus occupies the interesting space of being a spinoff game that doesn’t feel like a spinoff at all. It plays more like the natural evolution of what the mainline series could be rather than something that branched off from it, like Pokémon Snap or Mystery Dungeon. This is still very much a game about catching, battling, and training Pokémon, but that process has frankly never felt as streamlined as it does here. For that reason, while there is admittedly a lot to be improved upon, this has quickly become my favorite Pokémon game to date.

While “gotta catch ’em all” has been the byline for these games as long as I can remember, catching Pokémon has never been something I’ve paid much mind to outside of nuzlockes. If we’re being honest, catching a specific Pokémon is a fairly grind-heavy process. You go into the grass, walk around and load in and out of battle screens until the Pokémon you want appears, and then you have to whittle down its health and try to capture it without it knocking itself out, or risk having to go through the whole process again. In Arceusthe directions you can go with a Pokémon capture are multi-faceted. Simply sniping a Pokémon
with a ball is quick and easy and will often land a capture if the Pokémon is underleveled. If you want a more surefire capture, you can also sneak up on the ‘mon unawares and snap it in the back with a special ball while distracting it with food to boost your chances of a catch. If either of those methods fail, the Pokémon might notice you and become aggressive. From there, players can either pelt them with mud balls to lower their defenses and attempt another capture, or whittle down their health in a traditional battle in order to get the job done. Some Pokémon even run away when they notice you, making that initial capture attempt all the more vital. The reason I’m describing all of this is because I think it’s important to understand just how dynamic this new system is in comparison to its predecessors. In comparison to all of the gameplay updates that Arceus introduced, I think that this one got the most love – and deservedly so. Catching
Pokémon is what these games are about. And it’s never been this fun before.

But what do you do once you’ve caught all these Pokémon? You battle ’em! While there aren’t as many trainer battles as I would’ve liked to see here, certain Alpha Pokémon on the map pose a truly menacing threat, which makes the maintenance of a competent team key to doing well in the game. There have been a lot of updates to every facet of battles, and I take issue with absolutely none of them. A lot of these changes have the happy effect of making battles faster and less complex, without getting rid of opportunities for players to strategize and use attacks in accords with one another. For instance, the sleep and freeze effects have been changed to drowsy and frostbite. Instead of completely stopping Pokémon From acting, drowsy behaves like a version of paralysis that lowers defense rather than speed, while frostbite is a version of burn that effects special attack. Stat-changing moves no longer delegate between physical and special stats, opting to just effect attack or defense on the whole. Speed ​​has altered in an interesting way, with something of a hidden ATB system in battles. Certain moves might come out faster or slower than others, and most moves give players the option of choosing a version that comes out faster with expense to damage or a version that comes out stronger with expense to speed. By playing your cards right in this system, you can attack multiple times in a row, or try to slow your opponent down in order to minimize the amount of times they can hit you. It really is a thrilling system that calls for all sorts of new strategies within the familiar scope of the Pokémon meta, and I’m very excited to see how it gets fleshed out in the future. 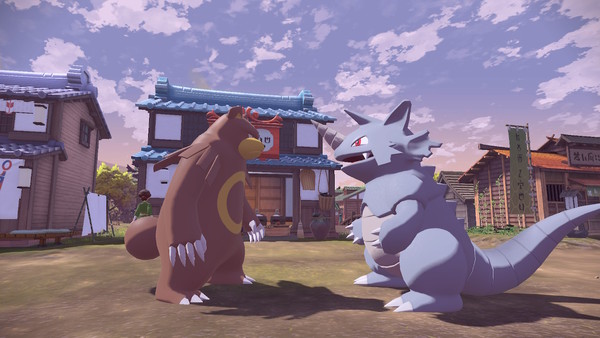 The process of training Pokémon has similarly been streamlined. For the first time in a
Pokémon game, I really don’t mind the forced experience share. It just makes sense in this context. Any time you capture a Pokémon, gather resources from the overworld, or win a battle, your team gets experience points towards levelling up. Learned attacked can be switched out at any time from the inventory, and Pokémon that have reached certain parameters can be evolved by command. Any attacks that might have once been locked behind breeding, TMs, or tutors can now be taught to your Pokémon for a price in Jubilife Village. Specific stats can also be trained by use of “grit” items, collected by battling wild Pokémon or by releasing caught
Pokémon back into the wild. Mints grown in Jubilife’s garden can also be used to alter the stat effecting natures of Pokémon. Frankly, I think the IV/EV system of old has been simplified here to a process that should be considered the standard for all future games.

Graphically, this game is something of a hit and a miss all at once. Background and landscape textures look absolutely reprehensible, clearly demonstrating the limitations of the budget and scope that this game had. To give GAME FREAK credit where it’s due, they did implement a pretty nifty effect upon their Pokémon in the overworld. When you’re really far away from a Pokémon, their movement animation will be simplified down to maybe three or four frames per second. As you approach them, they receive more and more frames of animation until they’re eventually smoothly animated. Some might call this lazy, but I found it to be a smart solution to a simple resource problem. In fact, I think that if the team had leaned a bit more into this jittery style, the final product would feel more stylized and aesthetically consistent – ​​but that’s just me.

The most inexcusable facet of Arceus is, with no contest, its plot. While I thought it was cool that many of the characters are clearly designed to be the ancestors of known individuals in the present-day series, I found that almost everything they had to say put me to sleep. The Pokémon series is no stranger to sub-par stories, but this feels like the first time that GAME FREAK has put so many chips down on one so lackluster. There were so many times – especially towards the beginning – where any momentum that the game had created was obliterated by lengthy segments of poorly written dialogue. The most frustrating part is that for a split second, right at the end of the post-game, the story actually does become fairly interesting. It just feels like the more interesting story had been swept under the rug in place of an easily consumable one. I certainly have my own prescriptions that could have made it better; spreading legendary encounters throughout the game rather than bunching them all up right at the end – having a more compelling and antagonistic force throughout the main game… there are things that could have been fixed.

At the end of the day, it feels like GAME FREAK was dipping its toe into the water with
Pokémon Legends: Arceus. Throwing some good ideas at the wall and seeing what would stick. A lot did. For the first time in a long time, I am very happy to be a Pokémon fan, and am excited to see where the series will go. I want more of what I saw here – and I want it done better.