The rerelease of 2014’s Persona 4 Arena Ultimax finds itself in an odd situation for such a thing. The fighting game scene has ballooned into an even bigger, better place in the eight years since, so putting Arc System Works‘ distinguished take on the Persona franchise out there on modern platforms makes sense in terms of capturing that current player-base. However, with that modern audience comes modern expectations: Fighting game fans nowadays expect that fancy rollback netcode as the standard in the online fighters they’re settling in to master, and that includes ports of older titles. This 2022 version of Ultimaxafter much prodding, had Atlus reveal that it would be receiving rollback netcode…but only on the PS4 and Steam versions, and it wouldn’t be implemented until later in the summer.

until then, P4AU is stuck with the ol’ delay-based handling of its online components. I was able to get a few matches in during this review period (playing on Steam), and it runs mostly well as you’d expect from any online game in 2022. There is some noticeable slowdown in introductions as the game syncs up the players (and even a couple instances of that slowdown between round calls), but it seems to pick up to proper speed once the fighting gets going. But there were still a few instances of frames dropping during my fights, and this was me presumably playing with other pre-release professionals, and I’ve got a wired ethernet connection! Between that first impression, and some of the less-than-stellar experiences that have been had with ArcSys’s other current delay-based jobs like Dragon Ball FighterZ and Granblue Fantasy Versusit means that an up-to-date online infrastructure will not be the primary attraction of this particular fighting-game reissue.

However that online mode does let you freely use the character-select screen in Room Matches, and it did allow me to set a profile pic of Yuko Nishawaki, my team manager and real girlfriend from Persona 3. Five stars.

Seriously though, releasing without that vaunted netcode might be enough for a rerelease of any other fighting game to be dead on arrival. But Persona 4 Arena Ultimax is not any other fighting game. It’s a direct follow-up to an immensely popular RPG series whose audience might not have gotten to interact with it during its PS3 days. So now that it’s out on modern platforms with a massive adoption rate, the question in the face of its questionable online implementation becomes: How much is in here for a single-playing Persona fan to do? The answer is an inspiring “Quite a bit!”

First of all, despite keeping the same title as the 2014 follow-up to the original Persona 4 Arena, this release acts more as a compilation of the duology. The whole of the story mode of the first game is included here, alongside the full story from Ultimax, as well as the previously-DLC “Adachi” story. It’s not approaching the triple-digit playtimes fans expect from the Persona RPGs, but we’re still talking several dozens of hours of an extra Persona visual novel packed into this release. This version even includes an “Auto-Battle” function for those that just want to go through that story without having to worry about proving their fighting skills in a non-turn-based format. Either way, it makes for an impressive amount crammed into a genre not otherwise known for quantity of this kind of content. Even if being able to freely flip between the original Arena story and its Ultimax follow-up makes the former come off as more of a drag in its repetitive storytelling compared to the more linear flow of the second one. But the Arena story preserves the original, better English voice actress for Chie, so it evens out. 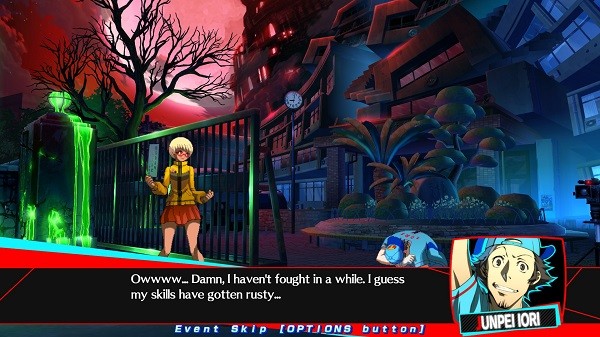 That story, pacing aside, should make for an entertaining follow-up to the RPG stories for any fans specifically coming here for it. Being framed around a fighting game and taking place over only a couple of days, it can be a more straightforward affair of a plot compared to the times of bonding and contemplations from previous Personas. But as an effective direct question to both Persona 3 and 4 that fully crosses the two over, it makes for a vivid example of fanservice (as well as serving as a quaint reminder of when P4 was the overexposed face of the franchisebefore P5 stole that crown). Honestly the best components might be the original characters created for the game, who blend concepts from both RPGs in interesting, world-expanding ways (to say nothing of the charm of the English-language Labrys’s absurd New York accent). If you’re just coming off of the PC release of Persona 4 Golden from a couple years ago, this should make for a treat of additional content. On the other hand, if you never got the chance to play Persona 3 on any of its old platforms, get ready to be bombarded with some pretty massive spoilers on the fallout of that one (Atlus please re-release Persona 3). But either way, for the Persona-faithful who never got to check all this out, it’s a wealth of story content that, as I said, you don’t even have to fight through- Oh right there’s a whole fighting game here!

As a fighting game, P4AU is as rock-solid as it was back in 2014. ArcSys have been masters of the 2D fighter craft for some time, and while their approach has changed a bit in recent years, this one is very representative of what they were known for in that era. Staples of the ‘Air-dasher’ subgenre are all on display here, including studio signatures like Roman Cancels, Instant-Kills, and Bursts (something all fighting games should have) seemingly designed to ease in any arcade fighting fans who might not be up on all the Persona elements. But the reverse holds true, as this also includes things like an auto-combo mechanism (something that’s only grown more prevalent in fighting games since) or button-hold easy special moves in single-player modes. Honestly, I’m totally down with inclusions like this, allowing singular players chewing through this game’s content the ability to do the all-important Cool Stuff in a fighting game right out of the gate before they commit to more intense practice. 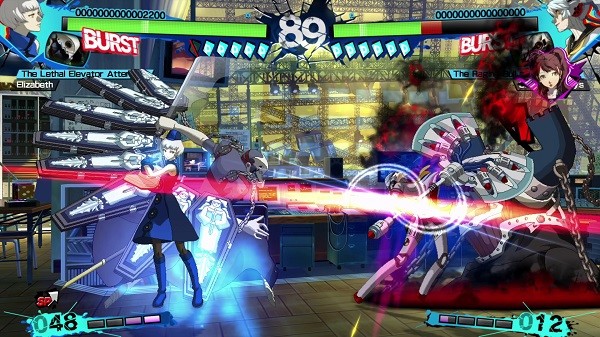 The game knows how to reward those kinds of efforts for everyone as well. The customary Arcade and Score Attack modes are here, yes, but the real long-term draw (beyond the Story Mode) is likely going to be the Golden Arena Mode. Refreshed a bit from its previous PS3 incarnation, this is effectively a gussied-up Survival mode that lets you level up both your character and a selected Social Link for bonuses and skills as you go. It’s delightfully dressed up in the livery of the Persona RPGs, and the sheer number of floors to fight through (including the apparent inclusion of special limited-event routes now) means a lot of long-term opportunity for even the most hardcore of offline-only players to feel rewarded for their efforts.

It helps that the presentation on P4AU It is still so on-point, but that’s to be expected given the source material. It means it’s a fighting game that comes preloaded with a selection of striking character designs and what’s probably still some of the all-time best video game music ever. Here again, ArcSys’s efforts complement and enhance the experience. The team moved onto (beautifully stylized) 3D-modeled fighters not long after this, so it stands as a testament to their 2D sprite work, matched against the 3D backgrounds, and enhanced by the riotous styles of the HUD and UI. The familiar chaos of all the systemic indicators, hit-flashes, cancel signifiers, etc. does threaten to get as too-messy as he did back in the day, especially for newcomers less accustomed to following this sort of thing. As well, the fact that the PS3 version originally only output in 720p has left some bits not upscaling as cleanly in the new version. It’s nothing major, but particularly in places like the Story Mode, you’ll note some assets looking a bit more jagged or skewed than others. At least virtually all the content from the fully-updated version of P4AU is packed in here, including previously-DLC characters, colors, and announcer packs. 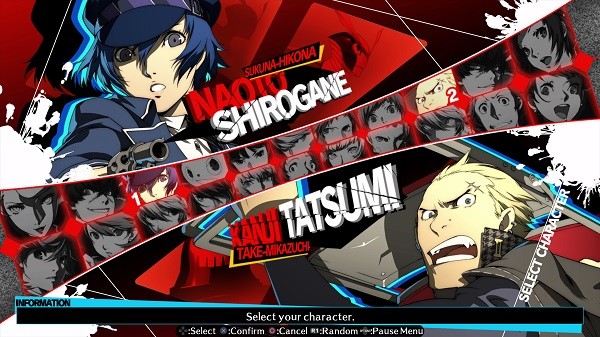 All that leaves Persona 4 Arena Ultimax Feeling a bit oddly-targeted, as a product. If you’re a fan of the Persona RPGs who never got into these fighting-game spinoffs, this is likely the best way to finally do so. And the ease of getting into the game, the wealth of single-player content, and the platform availability make it appealing that way. Hell, given the amount of time you’ll spend paging through this in visual-novel mode, I could arguably recommend the Switch version for that cozy, read-in-bed-ability. But then that recalls the point that rollback netcode won’t be on the Switch version, and the others will still be waiting a few months. It means that as a reissue of a proven fighting game that should reinvigorate its player-base, P4AU is jumping into a dense crowd without the proper means of distinguishing itself. And as such this release, on launch anyway, is actually better recommended for fans who specifically aren’t into the competitive fighting-game aspect. For those who are, you’re stuck having to hurry up and wait.

The reviewer was provided a code for the Steam version of this release.