Fans of old PS2 JRPGs might remember the obscure Metal Saga; what you might not have known is that it’s one in a series of dystopian post-apocalyptic JRPGs called the Metal Max games, whose brand of post-nuclear survival pre-dates the Fallout series by a whole six years. With Metal Max Xeno Reborn, Kadokawa Games restores 2018’s Metal Max Xeno for PC, PS4, and Nintendo Switch. We were able to sit down with the Switch version to explore the ruins of Dystokyo.

Xeno Reborn doesn’t really have much in the way of an ongoing story. Much of its storytelling, such as it is, revolves around finding survivors in what was once Tokyo while also preparing forces to protect the Iron Base from the rampaging SoNs sent by the murderous supercomputer Noah. The plot can be sparse besides the side-quests given to you by your gynoid companion Po-M. Characters don’t offer much in the way of storytelling (they don’t even get cutscenes after you recruit them), but dole out story details back at Iron Base when you talk to them. What fragments we do get are very dismal: staving off despair and seeking death at the bottom of a bottle, women escaping becoming broodmares for dwindling villages, survivors recounting the slaughter of their companions at the hands of SoNs… you almost appreciate that so much of the story is out-of-the-way because having these as cutscenes might almost be too much to handle. Intermediate, the story is a spartan affair that requires you to do a bit of legwork to find the worldbuilding. The most you could point to as an ongoing thread is the lingering mystery of your protagonist’s prosthetic arm—just don’t expect the story to be out in the open. The presentation is also somewhat janky, with weird fame rates and motion blur making your characters look ever so slightly off while they run around. We also noticed the occasional spelling error in the script. 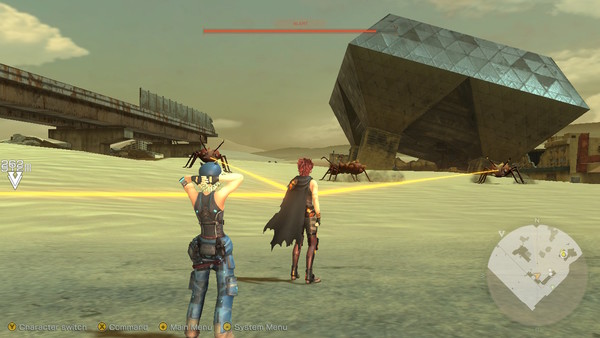 Speaking of characters, there’s a lot of open-endedness to their stat progression. Each character can equip weapons, armor, and accessories, with weapons ranging from firearms to laser guns to all manner of melee weaponry. Range doesn’t seem to be a factor if you’re swinging a sword (we had no issue cutting down SoNs from the other side of the room with a katana, make of that what you will), and with the wide variety of weapon types and enemy weaknesses it’s as fun to find and collect bizarre weapons as it is to use them against enemies. Combat is also unique: being within line-of-sight of an enemy increases an “Alert” meter that triggers a real-time battle upon the field map once it’s full. You can use that time to dip out of sight to decrease the “Alert’ meter, or take the initiative to score a pre-emptive hit on the enemy. Often, the early strike will be enough to defeat the enemy before battle even begins, scoring you experience and gold. This works whether you’re on-foot or behind the wheel of a tank, so if you have the patience to keep opening the menu and enough ammo to shoot down enemies one by one you can clear out whole rooms without entering battle mode proper. Leveling up from experience grants you skill points you can use to invest in a number of skill trees; While the freedom of being able to develop your party as you see fit is definitely fun, it would be nice if there were more ways to respec your characters. Our playthrough was made much harder because we didn’t know which skill tree made repairing vehicles easier, and by the time we found out we had already leveled up several times and couldn’t work up the points to invest in the appropriate skilltree, making our tank battles that much more difficult. 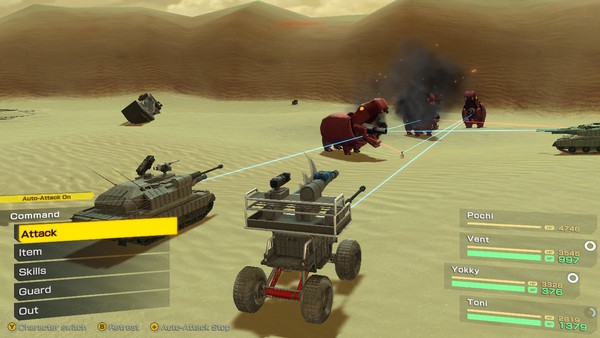 Ah yes, about those tanks: they’re a blast. You can find spare vehicles all over the wasteland, and they all require a different set of equipment from your human party members. Engines, weapons, trait chips that modify how their attacks work, and even their paint jobs—you have total control over how you kit them out. There is a wealth of customization to be had, and as you wander the wasteland you’ll find materials you can use to further upgrade your weapons or even build new ones. The exact nuts and bolts of your tanks aren’t very well-explained, however. During our play we had discovered that kitting out our vehicles with the best weapons we could find made all our vehicles glass cannons; All those heavy weapons taxed our engines, leaving the vehicles with less SP (and thus could take less damage before the vital systems were vulnerable to damage). This lack of clarity made some of the tougher battles very challenging: nevermind figuring out which weapons were most effective against the bounty-granting Wanted enemies (which serve as bosses), the peculiarities of weapon loadout means it’s easy to walk around with very a very weak fleet in spite of your best efforts.

In fact, unclear objectives are a major issue in Metal Max; it took us several hours of play to learn there was a fast-travel system in the game that facilitated returning to Iron Base. In both dungeons and the world map, there are piles of rubble you can attack to clear new paths, but it’s sometimes unclear what is a destructible pile of rubble and what is just an ordinary rock with cracks in it. What’s more, rubble can have a damage threshold you need to surpass in order to destroy it, gating you until you can figure out which weapon deals enough damage to move on. 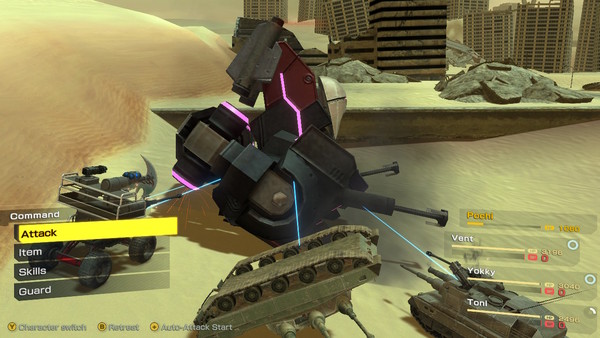 Metal Max Xeno Reborn can be a lot of fun, but it does make you work for it. Its oblique objectives and wild difficulty curves can definitely be off-putting—and yet there’s fun to be had in driving around the wasteland, scrounging for scrap metal, and blasting away mobs of cannon fodder. There’s something to be said about figuring out your own means of survival in Dystokyo. This game is definitely not for everyone, but there’s also an enjoyable experience to be had here. Grab some water bottles, rev up the motor, and keep your dog close: nobody said it would be easy living in the wasteland, but nobody said you couldn’t live it up while you tried.