In my eyes, Kirby Games have always been defined by their astounding visual and musical artistic direction that is somewhat held back simple yet serviceable side-scrolling platforming gameplay. Forgotten Land represented, more than anything else, an opportunity for HAL Laboratory to break out of this mold that the series seems to be stuck in. And don’t get me wrong: I’ve always loved Kirby games. I obsess over every scrap of hidden lore I can wrap my head around and replay Kirby’s Adventure on my DS nearly once a year. But my love for the series doesn’t mean I haven’t recognized how these games have been stagnating over the past several years. I don’t blame HAL for this either; Trying to come up with new side-scrolling platforming adventures once every few years while your main character is held back by the same rather limited movement options is a very big ask. And yet despite the odds, it seems they’ve managed to find new ways to innovate in Kirby and the Forgotten Land.

There’s a lot to talk about with this game – and I’m happy to say that most of it is good. So I’ll lead with the few criticisms I have. Erring on the side of sounding nitpicky, some of the story beats (especially the mind-control-related ones) in Forgotten Land could have been made more clear. Also, games that emphasize finding secret areas and hidden objectives like this one would so much replay value by allowing players to travel back and forth between the individual levels after completing them for the first time. I can’t tell you how many times I unknowingly went into a different area of ​​a level while searching for a secret only to realize my access had been blocked off, with no choice but to exit and restart the level to get back to where I was so I could continue the search. Most importantly, I’d love to see the developers be less fearful of implementing a steeper difficulty curve in the future. What we have right now is a game that very slowly ramps up, flatlines in the middle, spikes at the end, and saves all of its real challenges for the post-game. It would have been great to have some of that post-game difficulty scattered along the latter half of the main plot, and then have the post-game just consistently bring the pain. 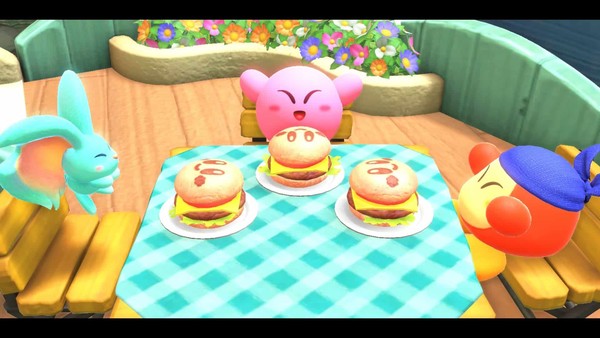 As I said before, Kirby games have always excelled when it comes to visual and musical quality. Forgotten Land is no exception – in fact, I’d say that HAL Labs outdid even themselves here. Previous entries in the series can come off a bit too saccharine and sickly sweet, like seeing a child’s wildest dreams thrown up onto a screen. I’ve never taken issue with this style, but I can immediately understand why it’s not for everyone. Forgotten Land is an excellent departure from this standard, contrasting the unhindered cuteness of Kirby’s characters and enemies against the very realistically rendered backdrop of a post-apocalyptic world. This was an absolutely brilliant decision that led to so many interesting settings and level designs. As for the music, I have always been a stout defender of the opinion that the chiptune era of Kirby music is far superior to everything that has come later. That being said, Forgotten Land has given us the best-orchestrated soundtrack the series has produced so far. This game seamlessly slips in and out of so many different styles and moods of music that I can say with certainty that there is definitely something here for everyone. Even that chiptune style that I love so much rears its head at the climactic peak of the game. 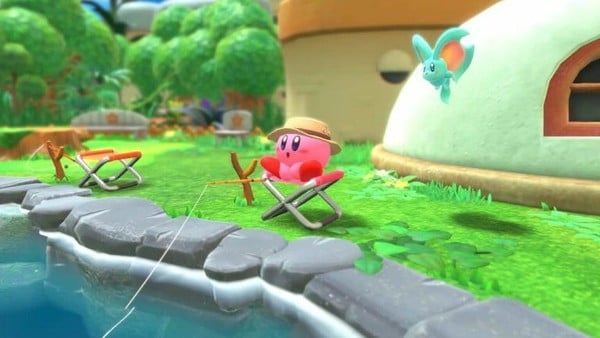 The crowning achievement of Forgotten Land, however, has to be how it interpreted and improved upon the gameplay of its predecessors. Abilities are no longer just a variety of means to the same button-spamming end – each now comes with a distinct style of play attached. There are abilities like tornado and needle where you’ll prioritize picking up objects and enemies and try to throw them at the biggest target you can see. I was particularly fond of the ranger ability, which allows you to snipe enemies from far away and time your dodges to access a rapid-fire option. Sword and hammer are pretty simple – get in, stay in, and don’t get hit. Alongside all of the new life that has been pumped into these abilities is the option to upgrade and alter them as the game goes on, which is another great addition that should become a standard fare for the future Kirby series. Even the platforming has been upgraded – the animations around Kirby’s jump and fall have never looked better, and his hover has been effectively nerfed, only allowing the pink puff to rise to a certain height over whatever surface he is above, encouraging players to jump through Instead of hovering through entire levels. The boss-fights in this game have been designed tremendously well. Kirby’s new ability to dodge-roll and counter is key in these challenges, and each of them have fantastic presentation and style. The new mouthful modes serve to completely change up the gameplay, adding hang gliding, racing, and boating segments to the game, with the addition of some interesting puzzles by way of stair and water mode. 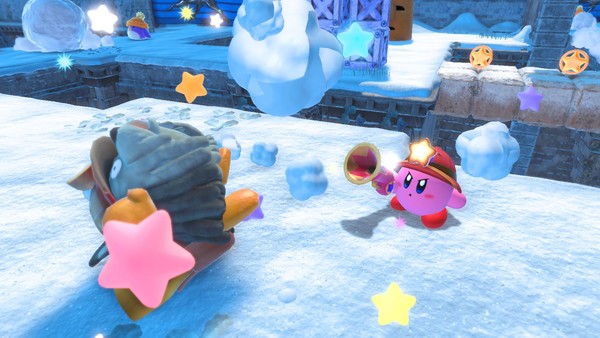 All in all, HAL Labs has finally breathed new life into the Kirby series. Forgotten Land sees Kirby at their best in years, and might just go down as one of the best Kirby games ever.