With how much a certain blue hedgehog and a would-be reformed Japanese gangster dominate Sega’s limelight, you’d be forgiven for forgetting that Sega also plays host to the video game exploits of Hatsune Miku, the famed digital singing platform musicians have used for years to create all kinds of music videos. The Project DIVA games have done a fantastic job of giving players as much Miku as they can handle, and with the port of Project DIVA MegaMix+, players can look forward to even more Miku than ever. How does it hold up?

Well, at first blush, it’s almost overwhelming: MegaMix+ features just over 170 songs right out of the gate. These include remixes of classic hits from old Sega titles like “After Burner” and “Magical Sound Shower” from Out Run, or plenty of Miku’s old hits like the “PoPiPo” vegetable song and “Black Rock Shooter.” There are also some curious entries like a Miku-cover of the Nyancat song. And it’s not just Miku: plenty of these songs are sung by fellow Vocaloid “members” like the Kagamine siblings, Meiko, Megurine Luka and Kaito, and some songs even feature alternate vocal tracks. There are also full music videos for each song, and you can even view them divorced from the gameplay.

But what about the gameplay itself? It’s your typical rhythm game affair: input the command as the appropriate symbol flies onto the screen and lines up with the indicator, be it tapping or holding the face buttons or flicking the control stick in the appropriate direction. The commands come in from all over the screen, and depending on the controller you use you might get confused (God help you if you’re used to a Nintendo layout and you’re using an Xbox controller on PC). The sheer number of prompts swarming the screen can be a little overwhelming at times, and because they come in from all over it can be a easy to miss the occasional prompt. And for the dedicated player, that can cost more than your combo: songs in Project DIVA have extended bonus sections that are only unlocked by surpassing a given score threshold. So not only is good play rewarded with an extra challenge, but also with an extra music video—even if it’s hard to pay attention to Meiko belting on an aircraft carrier because there’s a swarm of “Bs” drifting in from off-screen.

Besides extended music videos and high-score bragging rights, successfully clearing songs earn you rank points and in-game currency. Ranking up and earning points unlocks new options for the in-game wardrobe menu where you can customize the look and design of any of the characters in-game. Outfit pieces can include costumes based off of other Sega games, as well as the usual gamut of pajamas, swimsuits, and holiday outfits. There are also shirts you can design from the ground-up, and all of these outfits can be saved and used by the characters during music videos. You can even designate specific outfits per video. There is no in-game photography mode, and given the wealth of outfits (and the nature of Miku and her friends), this feels like a huge omission. 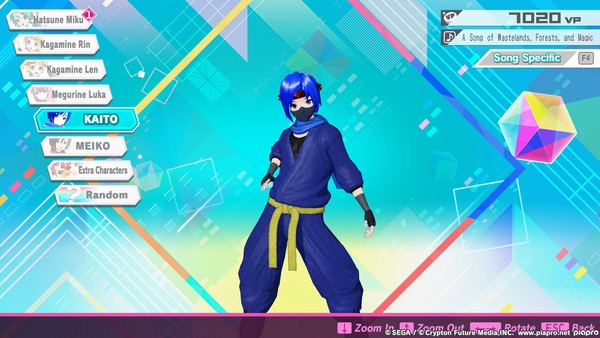 And that’s about it for MegaMix+. Besides the extensive music list and the wealth of customization options at your disposal, there isn’t much else to it. Provided, “only” 170 songs (with many more available in a DLC bundle) is nothing to blow your nose at, and you could easily spend hours fiddling around with every last character’s outfit. There are also higher difficulty modes to unlock, for those who wish to truly master MegaMix+. The music videos are all crisp and fun, with Miku and friends looking as cute and colorful as they ever have. It’s a bit of a shame the music videos are newly choreographed dances and not the original videos that were popularized on Nico Nico Douga all those years ago, but I can understand Sega wanting to have those lovely Miku models instead of the original “Miku Miku Ageru” music video. It would be nice to see a Project DIVA game delve deeper into the history of Vocaloid, and given the Sega connection I’d liked to see more Sega-themed songs, but that’s a subject for another day. For fans looking for as much Hatsune Miku as their heart can bear,
MegaMix+ is as good as you could ever hope for on the PC. For folks just looking for a fun rhythm game, hey, this is still a tremendously fun time unless you just really have it in for girls with green hair.