Titan Comics launched its new Titan Manga imprint on March 22 when it announced a release of a director’s cut edition of Takashi Okazaki‘s 1999 Afro Samurai seinen manga on July 26.

ATOM: The Beginning is an original manga based on the God of Manga Osamu Tezuka‘s world-famous series Astro Boy. It works both as a prequel to the original series, telling the stories of the developers of the artificial intelligence that would eventually give birth to the iconic Atom, and as a stand-alone sci-fi manga about the turbulent lives of two robotic engineering students and their latest revolutionary project: the unassuming yet insanely strong A106, or “Six.”

Tetsuro Kasahara launched ATOM: The Beginning in Hero’s Inc.‘s Monthly Hero’s magazine in December 2014 as a prequel of Osamu Tezuka‘s Astro Boy manga. The manga moved to Hero’s Inc.‘s Comiplex website in 2020. Tezuka’s son Makoto Tezuka handles the editorial supervision of the manga, and the series is in collaboration with Tezuka Productions. Masami Yuuki (Patlabor the Mobile Police, Birdy the Mighty creator) is credited with “concept works” for the series. Hero’s Inc. published the manga’s 16th volume on January 5. The manga is on hiatus and will enter its new “Tobio Arc” upon returning this fall. 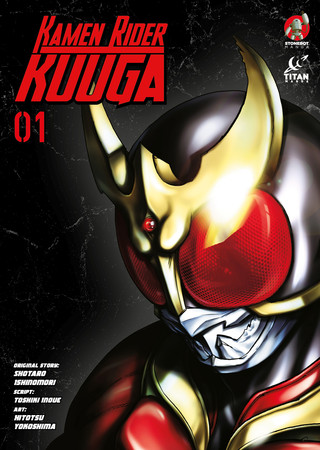 Kamen Rider Kuuga is a manga adaptation of the famous Japanese TV drama series of the same name, centered around the first incarnation of the Kamen Rider hero for the Heisei Era (the beginning of the 21st century). This manga goes beyond the bounds of a normal adaptation and redefines its hero for modern audiences, expanding its universe and connecting it to other incarnations of the bug-eyed hero in a completely approachable way for new readers who haven’t encountered a Kamen Rider story before. It’s a perfect starting point for anyone who wants to know why Kamen Rider is so beloved by people around the world.

Artist Hitotsu Yokoshima launched the manga, the third one based on the live-action Kamen Rider Kuuga television series, in Hero’s Inc.‘s Monthly Hero’s magazine in November 2014. Toshiki Inoueone of the scriptwriters for the live-action series, writes the scripts for the manga, and producer Shinichiro Shirakura (Gekijōban Kamen Rider 555: Paradise Lost) plans the series.

The manga moved to the Comiplex website when Monthly Hero’s ended publication in October 2020. The 19th compiled book volume in the series shipped in Japan on March 29.

The “Kamen Rider 50th Anniversary and Beyond” panel at the Comic-Con Special Edition event last November had announced that StoneBot Studios would be publishing the manga in English.

The Kamen Rider Kuuga television series aired from 2000 to 2001. The series was Toei‘s first new Kamen Rider series following the passing of creator Shotaro Ishinomoriand it marked the beginning of the Heisei-era Kamen Rider series. Shout! Factory TV is streaming the series online.