I’m Quitting Heroing presents an interesting twist to the standard adventuring hero formula. Our lead Leo is a powerful warrior and spellcaster who, after defeating the demon queen Echidna, didn’t receive the warm welcome he had anticipated. Instead, he gets run out of town and there are even assassins sent out after him. Now he is applying to be a part of the demon queen’s army – that is, if he can get past the interview step.

The premiere mostly centers around Leo and the four generals of Echidna’s demon army. We get a bit of background from each of them and how they are defeated by Leo, as well as a few flashbacks to Leo’s adventuring life and what brought him to this point. In the end, the generals agree that he might be able to help revitalize the demon army and get things back on track, and decided to put in a good word for him.

I’m mixed on this first episode. On the one hand, I’m glad we’re in an actual fantasy world and not an isekai situation (so far as I am aware), which is a nice change of pace. The comedy is pretty solid and gave me more than a few chuckles throughout his episode. The framing around the opening sequence was strong, with Leo cutting through the flashback and the ominous string music being notable highlights. Similarly, the animation is perfectly fine and the character designs are varied enough to be interesting.

There are a few stumbling blocks though. Leo is very self-absorbed and the “I am so amazing why is everyone else so terrible” setup around him is… not exactly framed as a flaw. Hopefully this ends up being something he has to overcome or grow away from in the future, because otherwise, this episode is almost entirely about how great Leo is and everyone basically agreeing that yes, Leo is indeed great (except for the people of the kingdom who did not like him because he was just too great at demon-slaying). I also am not a huge fan of Lily and the sequences involving her. 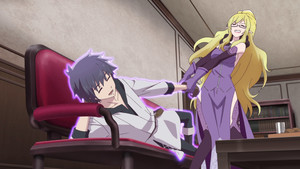 Episode two revolves around that most critical of topics: delegation. I’m only half-joking, as the episode is indeed mildly thirsty, with a lot of random guffaws about boobs and kisses and so forth. That said, they are honestly pretty tame as far as these things go, and simply functioned to fill air-time without adding all that much in return.

The real meat of the episode was about prioritization and efficiency in kingdom management. Leo spends most of the episode helping Shutina bring the mana reactors for the fortress back online, alongside other administrative tasks. The idea about the recharging talisman and a work crew to keep them rolling is, well, pretty basic division of labor stuff. I’m not sure how to feel about the overall message of “Hey, have you ever heard of delegating tasks before?” On the one hand, one would reasonably assume Shutina to have some experience with delegation – she is one of four generals in a vast army after all. Then again, the demon army lost, so perhaps these inefficiencies have been there all along. In any case, it was too low-stakes a personal hurdle to be engaging, partly because it’s not clear why the incredibly basic solution to that was framed as such a brilliant decision from Leo. If there has ever been a task, someone somewhere has to have thought “There has to be a way for me not to have to do this.”

The best part of the episode by far was Leo trying to figure out his rebrand. Testing out names, making cool armor, doing voice modulation stuff, and asking other people if his new title sounds cool are all great bits of characterization. It would be a nice character wrinkle to have Leo be much better than others in terms of intelligence and combat prowess but much more awkward and unsure of himself in areas like branding and communication. We’ll see if they stick with that in future episodes. 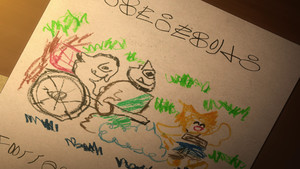 Hey, this Lily episode surprisingly turned out pretty all right. There were a few undertones that I could do without, but overall it had a good heart and *gasp* a lesson for Leo.

The island setting is an interesting change from our previous generic fantasy locale. Leo standing on the beach in full edgelord armor makes for a pretty funny image, whether it was meant to be or not. The general vibe of the episode is also good, with everyone working together and Leo being a bit out of his depth.

The comedic hook of the episode’s plot has to do with Leo challenging Lily to help her mature. Leo is clearly underestimating Lily, and watching her upend his expectations at every instance, whether due to her innate power from her Fenrir form or her general resourcefulness, is such a great payoff. By the end of the episode, Leo even admits that he misjudged her and went through a whole lot of nonsense when he could have just communicated with her. The entire segment functions as both a great comedic highlight and a good lesson for our hero! Leo concocting these elaborate goofball scenarios all because he doesn’t think he can just speak to Lily is something that he does need to learn and grow from.

The lore behind the island chains was a bit of a mess. It was clearly just meant to be a place for lots of Adventure™ but I’m not sure the descriptions meshed all that well. It’s supposed to be an unexplored mystery, but if that’s the case, why are there countless shipwrecks and entire island populations existing and thriving? Furthermore, this particular island is so well-known to the demon queen’s forces that they had pre-existing trade relations with them – relations so vital they can’t possible do without them. This also makes the entire crux of last episode about the lack of delegation feel like that much more of a head-scratcher: how exactly is all of this international trade happening without at least some robust logistical structure? But maybe that’s analyzing the show too much.

Side note: I think Lily’s adorable little drawings are great. Seeing all the happy little monsters cheering is Good Art as far as I’m concerned.


Grant is the cohost on the Blade Licking Thieves podcast and Super Senpai Podcast.