Hey everyone, it is Perswayable here and today we will be discussing Boruto: Episode 34: The Night of the Shooting Stars. I am not going to lie, I prematurely thought this episode was going to be boring, but there were a few surprises worth noting.

The episode starts with Sarada essentially telling Boruto that friendship is not eternal. Boruto decides the group should catch the Eternal Carp — a delicious fish that, according to Mitsuki: “…once you taste it, you never forget the taste.” Boruto wishes to catch the eternal carp as a group of friends before they graduate the incoming genin exams and all partake separate paths.

The group sets out to Kaminarimon Camping Grounds. At first, the shinobi struggle catching the Eternal Carp because of a rainstorm which increased the currents. Everyone returned to camp to feast on Iwabe’s curry, but Boruto was unsettled with missing out on the Eternal Carp.

This is where things get awesome. Boruto hooks the Eternal Carp, but it is a massive fish. As the Eternal Carp drags Boruto the edge of the cliff, Sarada grabs Boruto by the jacket to help him reel the fish in. Sumire then summoned a baby Nue (SOOOO CUTE) and used its power to travel down Boruto’s fishing line to ensure the line would not snap. Sarada grabs Boruto’s pole (stop it). As the two began slipping off the cliff, Shikadia Shadow Paralysis the two to prevent them from moving. Mitsuki then arrives, extends his arms into the water, and casts a lightning Jutsu.

Inojin uses Super Beast Scroll and flys Iwabe, Metal Lee, Denki, Chocho, and himself over the scene. Iwabe and Chocho jump out. Iwabe casts Mud Wall in front of Boruto and Sarada’s feet to further prevent them from falling. Chocho extends her arms forward to help catch the fish. Metal Lee throws kunai from the Inojin’s aerial super beast to close off any escape routes and Denki…well, he did nothing. Boruto casts shadow clone jutsu when the Eternal Carp is in the air and captures the Eternal Carp!

At the end of the episode, as the classmates are feasting, they are marveled at their teamwork (foreshadowing much). Sarada smiled at Boruto’s happiness and the characters spent time praising one another’s abilities. They spend the rest of the evening gazing at the stars and the show depicted flashbacks of the academy process. Boruto hopes one day they all can return together.

At 22:57, after the credits and before the next scene, we see Toneri. He appears sick as he coughs up blood. What could this mean? It was not included in the next episode’s preview. He states Boruto is against destiny and wonders how Boruto will overcome it.

In the end, I give the episode a B+. Seeing Baby Nue and the creativity of everyone using their skills to catch the Eternal Carp were awesome experiences. Furthermore, seeing Boruto’s determined beliefs in eternal friendships were nostalgic of Naruto’s childhood days. And what could be happening with Toneri? Do you agree? Disagree? Let me know on social media and join us for the daily discussions! 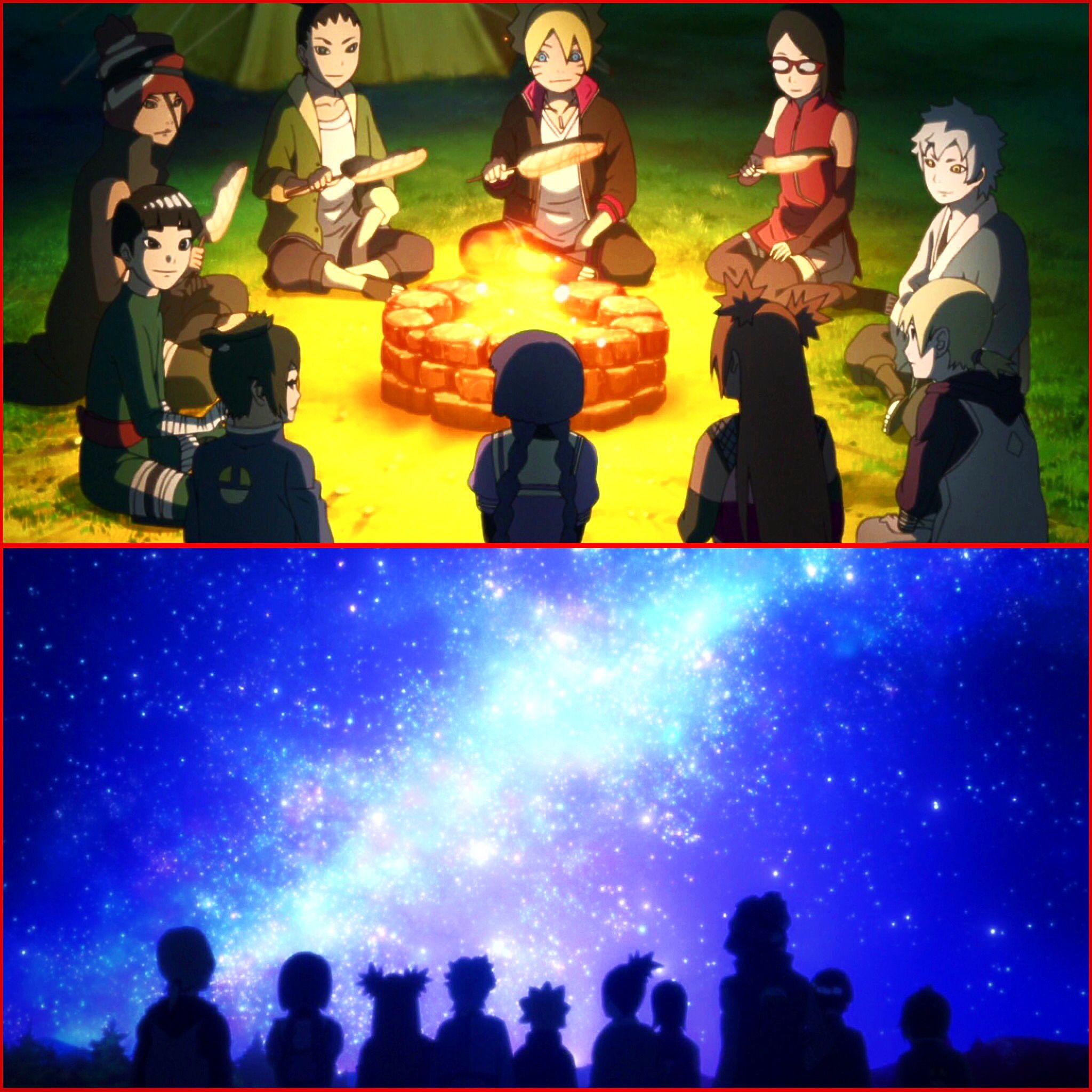 There was one moment Sarada asked Sakura about friendship. Sakura informed her daughter that she does not know if friendship is forever, but that the friends she made as a young shinobi are still her friends in the present time. Furthermore, Sakura informed Sarada that she did not care much for Naruto in the academy, but became “like family” afterward; Sarada seemed surprised that she and her peers could become closer after the academy.

It showed more of her Sakura side. Unlike Sasuke, she does have friends close to her she enjoys being around (such as Chocho). But, similar to both Sasuke and Sakura, she still needs to discover what friendship truly means. However, she would later apologize to Boruto as it truly shows she cares for Boruto’s feelings (and even helped him out with catching the Eternal Carp).

We saw Sumire in this episode declaring she would work hard to become a shinobi like the others. In the manga, we saw her recently appeared as helping develop technologies — something which occurs after the Genin exams. This was relieving because this essentially confirms her as a re-occurring character in the series when many were unsure since her role drastically reduced after the Nue saga. And can we all take a second to appreciate Baby Nue? I was NOT expecting that! It shows Sumire will be able to use Nue as summoning and also utilize his Jutsu!

Once again, his social awkwardness is better depicted than Sai’s back in the Shippuden days. Although the scene was brief, him appearing directly in Boruto’s face when they were at the diner was hysterical. Given Mitsuki’s antics in Episode 33 when he was ready to gank an old grandma for Boruto, his character development is easily making him a fan favorite. And his willingness to jump in and help Boruto to catch the Eternal Carp was magnificent.