The 2013 series Shingeki no Kyojin has arrived at its end, with its final installment of Shengeki no Kyojin: The final season (Attack on the Titan: The final season). It was an adaptation by the same name from Manga created by Hijami Isayama. The show’s dark theme, violent storyline, amazing battles, and brutal scenes are what fans are fond of. And have never been disappointed by its bleakness.

This season’s trailer starts with the same sound effect where it left in the previous one, the same scene on the eyes. An eagle flying by the skies. All the characters have aged up; There seems to be a time jump in some of the other episodes. Villainous characters such as Zeke and Reiner are going to give a tough time to our heroes.

The first season and its popularity –

The first season which was first aired on 7th April 2013, gained massive popularity. A 25 episode series, with its final episode that was aired in Japanese theatres. Due to its popularity, the anime was compiled into two movies, namely, Attack on Titan part – 1 Chrimson bow and Arrow (Shingeki no Kyojin Zenpen – Guren no Yumiya) and Attack on Titan part – 2 Wings of freedom (Shingeki no Kyojin Kohen – Jiyu no Tsubasa), released on November 22, 2014, and June 27, 2015.

The series started with Eren Jaeger and his childhood friends, Mikasa Ackerman and Armin Arlert, who wanted to cross the huge wall around their city to see the ocean. Eren Jaeger wanted to join Scout Regiment and discover the secrets across the walls. His mother was reluctant about his decision. Their city is breached by Colossal Titan, after which many titans attack the city in which Eren Jaeger’s Mother, Carla Jeager, dies. Two years later, they join Scout Regiment.

Due to unforeseen events, it turns out that Eren can turn into Titan. Military commanders realize that he can be used as an asset in the war against Titans. At the end of the season, Annie (Female Titan) fights one on one with Eren, in which Eren wins; Annie turns into a cocoon and is kept under security for the sake of the future.

Season 2, which aired after a long time between April 1st, 2017 and June 17, 2017. With 12 episodes in the season, on the other hand, it was broadcasted on MBS TV. The season takes the story further, where Eren and his friends in 104th Training Corps turn into full Survey Corps members. Soon they fight a female titan and other titans approaching the wall. Rose out of the three walls, Maria, Rose, and Sheena, respectively.

They get to uncover the dark secrets of the outer world as well as the inner world. During which various characters are entangled in the storyline. Eren fights the Female Titan who ate his mother after losing his Titan power during a war with the colossal Titan. The season ends with Levi getting to know about the Titans who were inside the walls.

Season 3, and it’s the mind-boggling story, the origin of the Titans revealed –

Season 3, which aired on NHK general TV as of season 4, has 22 episodes in two parts. Moreover, The first part of 12 episodes aired between July 23, 2018, October 2018. The second part was released on April 29 of 2019. The story goes on with bloodshed and more dark secrets by revealing the truth behind titans’ origin and the story of Eren’s father becoming an attack titan. Eren gets to know the story of how he ate his own father just like the previous generations did to transform into Titan.

He gets to know about his abilities and bloodline through which their generations have passed by. During the season, they get to know about the government corruption with different clans and their wars from thousands of years. Filled with wars between base Titan and Eren and his team, their city is brutally beaten up. They get to know the story of Ymir (The first Titan) and the Fritz family. Eren and his team start exploring and expanding, saving lives.

The fourth season, beginning of the end –

The fourth season and last installment of which the first episode aired on 7th December 2020, again gained popularity amongst its fans. The second episode is aired on 13th December 2020. The 16 episode series is going to answer all the questions that remained unanswered. In fact, the main characters Eren, Misaka, Levi, and Armin, will be the centerpiece in this. Marley, who is raging war against other clans, is the target for the main characters.

The story throughout the three seasons focused on bits and pieces of stories. This season will give out the full potential of the story, unleashing the core character’s powers and ambition. Their failures and successes led them to the reaching end of it all, and some rumors say that this season will finally show Ymir’s fate. 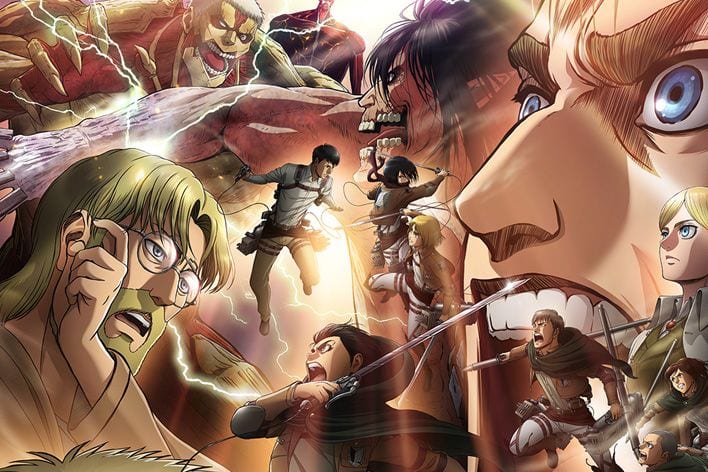 The third episode of Shingeki no Kyojin the Final season will release on the 23rd of December 2020, unnamed till now. The second episode is named “Midnight Train.” The first episode set the tone of the show. The fans throughout the world loved character designs and have given positive reviews since its release; Even though the design team has changed, makers have managed to catch audiences’ attention. All the episodes of the previous season are available on Crunchyroll.

The season might be the end of it all. The history of Titans and Ymir’s creation, the age-old clans, Fritz family, the walls, and all the secrets have been revealed. Wars with the last villains are remaining, and the conclusion is what will be of interest.

The show is insanely popular as its IMDB rating is 8.8. Moreover, the first episode of season four has a whopping 9.5 rating out of ten. It is speculated that this might be the final season-ending of the epic storyline. While episode two has not gained as much hype as its previous one, fans are still eager to know the surprises hidden in episode three. Shingeki no Kyojin’s next episode is going to release on 23rd December 2020.

Also Read: Attack on Titan Season 4: Episode Schedule and Where to Watch?